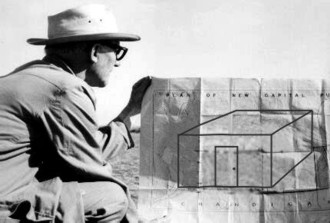 Le Corbusier tragically died before he could finish his most ambitious project ever, the Large Flat-Looking Box.

Charles-Édouard Jeanneret, better known as Le Corbusier (October 6, 1887 – August 27, 1965), was a Swiss architect who frequently travelled as a French broom salesman, is single-handedly credited with turning architecture from an art form, one which celebrated man's spirit through the creation of uplifting and inspiring structures, into a vehicle by which humanity housed itself in a bleak, despair-filled world of soulless concrete and glass boxes devoid of anything resembling 7,000 years of human achievement. Le Corbusier was the same for architecture what Pol Pot was to societal reform.

In Le Corbusier's world, there were no first names. [How very bourgeois. - ed.] Instead, each person was free to choose that one specific name which identified himself or herself only as an abstraction, as opposed to a member of some uselessly-traditional family or ethnological grouping. Le Corbusier said "by law, all buildings should be white" and criticized any effort at ornamentation. He also ruled that once his buildings were finished, nothing in them could be allowed to interfere with the purity of his architectural vision, including such needless "gewgaws" as openable windows, windowshades, curtains, doors, lights, or bathrooms.

Le Corbusier was also instrumental in outlawing the word "house" and "home" throughout Europe. Instead, people would dwell in Machines for Living, which would free them from their petty desires for such bourgeois, materialist items such as beds, pillows, cushioned chairs, towels, and toilet paper. Le Corbusier also helped eliminate the word "building" from all known languages, although the edict was repealed by the 1945 Yalta Conference, much to his annoyance. No, instead people would go to work in Machines for Working. In Germany, Hitler's move to secure the Sudetenland stemmed from his fear that Le Corbusier would get there first and outlaw all political movements, which he had renamed Machines for Controlling the Masses.

Among his enemies was Soviet Premier Josef Stalin, who despised Le Corbusier because the Swiss man who masqueraded as a Frenchman actually made Stalin look soft. Stalin allowed his people to live in state-owned apartment buildings and work in state-owned factories. Le Corbusier's theories were adopted by the builders of public housing in the United States; he went several steps further by insisting that all human beings live and work in underground bunkers, in order to avoid "aesthetic complications" that might arise from the use of his buildings by actual people.

Le Corbusier was also famous for getting into "pissing matches" (which he referred to as Machines for Pissing) with other well-known architects, including: 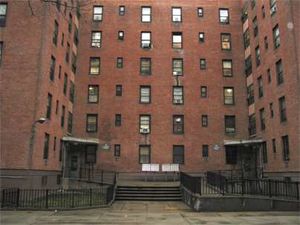 Le Corbusier's feelings about on criticism were summed up best by the architect himself: "If I would not wipe your buttocks, why would I care what you think of me?" In fact, LeCorbu felt himself so far above his critics that given the chance he would kick them as if they were "dogs in heat that block my path at the moment."

However his feelings about his critical comments towards others, especially their environment, were sharp and to the point. Upon visiting the Bourgeois Garden's Project in Chicago, Illinois, the architect sniffed at the nondescript buildings and wrote:

In 1959, LeCorbu (as he was known to his intimates) redesigned the personal massager device and re-christened it the Machine for Pleasuring. However, his reputation was dealt a severe blow when it became apparent that the new design was unsatisfactory for millions of women around the world, who selfishly insisted that the devices were necessary not for pleasure, but for hitting those "hard-to-reach areas" especially in need of tension release. Rebuffed and broken, he retreated to his Machine for Contemplation, and spent the next six years brooding about the past and drinking Pabst Blue Ribbon.

On 27 August 1965 [not August 27, 1965, because that would be a very, very bourgeois - ed.], the only architect that ever mattered decided that he desired a bath. Against his doctor's orders, Le Corbusier stripped, donned his Machine for Bathing, went for a dip in the Mediterranean Sea at Roquebrune-Cap-Martin, France. He disappeared, and his body was never found. It is assumed he suffered a common man's heart attack, and his body was swept away - not into the ocean, but into the Machine for Drowning (as he had renamed it).

The legacy of Le Corbusier has been gazillions of ugly, trivial, boxes of reinforced concrete and glass panes all around the world, hideous high-rise suburbs in Europe (but especially in the Eastern Bloc countries) and a looming skyhigh demolition bill. All in all, he was a Machine which makes insane.

For those without comedic tastes, the self-proclaimed experts at Wikipedia have an article about Le Corbusier.