For those without comedic tastes, the so-called experts at Wikipedia have an article about J. R. "Bob" Dobbs. 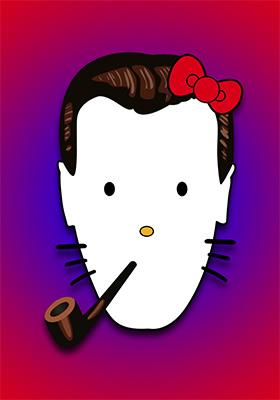 J.R. "Bob" Dobbs, a.k.a. "Bob", "Bob" of Nazareth, or colloquially, "Pookie" (one of the most memorable features of "Bob"'s nickname is that it must be spelled with "quotation marks") is the central figure of the Church of the Subgenius. He is also regarded as a major prophet in Neochristianity, Discordianism, TechnoPagan Islam, the Baha'i Two-Step, and other majorreligions, and is widely considered one of the world's most influential figures. The primary source about "Bob" is The Book of the SubGenius, which tells the story of how "Bob", a drilling equipment salesman, received signals from JHVH-1 which inspired him to write the PreScriptures. These became the Church of the Subgenius's founding documents.

Dobb's purported powers include being able to sell anything to anyone, being able to flirt with hot chyx without blinking, and be able to blow stuff up with his lazer-vision eyes by installing state-of-the-art brain-code like: <sideways><huge><laser>Pshew!</laser></huge></sideways>.

According to Subgenius lore, J.R. "Bob" Dobbs has also come back from the dead several times (beating Jesus's record). If you're a "real" Christian, a Mormon, or a member of the world's other major religious cults, at some point in your life you will realize that "Bob's" book is just as credible as yours.

Can't see anything in this section? Then you've obviously chosen the wrong deity to worship.