“Editing Uncyclopedia is like taking a picture of yourself nude whilst falling to your horrible grizzly death. And what I mean by that is that Falling to your death whilst nude and Uncyclopedia both have one thing in common - you have to say cheese.”

~ Francis E. Dec on on the intricacies of Uncyclopedia's cheese-like anatomy

If one day for some reason you inexplicably decide to edit Uncyclopedia you are faced with a challenging and bamboozling task. Responsible parents frown upon the practice for it's known dangers. If done in small doses, editing can result in a heightened state of awareness and the growth of bodily hair. If taken in excess insanity and the transformation into a were-editor will ensue. It is thought the admins were set apart from other users because they were hugging dogs as they overdosed on Uncyclopedia. This strangely gave them added powers such as deletion, protection and wolfishly sharp teeth.

Editing Uncyclopedia, though complex and difficult, is really easy if you follow my step by step guide below:[edit]

The evil little Bastard! He wants YOU to die 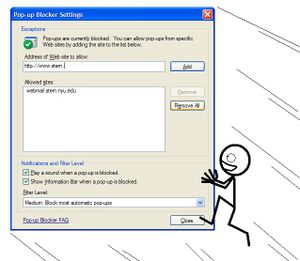 Wheeeeeeeeeee!!! Traveling to Uncyclopedia is how Tarzan trained himself for the jungle.

You by now will have created undoubtedly the best existing article ever. Can I have your autograph?