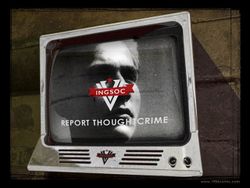 Citizen, rejoice!
A great victory over the forces of entropy, Goldstein and indolence has been won. Following the incident 3 days ago where a vile act of sabotage by foreign powers caused an outage in all telescreens, the Ministry of Plenty has now issued a replacement telescreen for every dwelling in Oceania. This will doubtless come as a relief to all party members as constant twenty-four hour surveillance is for your benefit and not ours.

In celebration of wresting the shipyards of Gdańsk from the forces of Eurasia, and to coincide with the launch of the new telescreen, Big brother has declared that this evening from 18:00 - 19:00 will be devoted to a celebration of manual labour in Oceania whereby all party members regardless of age, sex and ability will install the new telescreens in their homes. The Ministry of Truth has enclosed instructions regarding the installation of the device and these instructions should be followed without deviation. Failure to install the device correctly is strongly suggestive of subversive tendencies and will be closely monitored by the inner party. Once you have completed the installation you will take all items within the package and the package itself to the Ministry of Truth so that they may be archived.

Big Brother Is Watching You

He will be in a minute at any rate.

Sincerely, A. Twinch,
Room 102,
Department of Cooperation,
Ministry of Love

The most crucial part of installing the telescreen is to accept that you will be involved in the process as little as possible, the majesty of the telescreen is such that you could not comprehend it even if we were to detail exactly how it works and why. Your greatest asset is that you know nothing, your ability to unquestioningly obey the orders of this book demonstrates your strength of character, strength of mind and, hopefully, strength of body seeing as how the new standard telescreens weigh 96kg and are 6ft long. This makes them harder to steal, sabotage or hoodwink and, unfortunately, to install.

All outer party members are assured that the contents of each package is exactly the same and that all telescreens are installed with the items within the container and are never concealed behind paintings, murals or graffiti items. Inner party members and certain trusted others will have received large canvas paintings, murals and approved graffiti items, details for the installation of these items are to be found in your stool pigeon manual and Thought Police handbooks. Now, let us set out the mighty tools entrusted to you within the package:

If the hand grenade has been left out of your package and you feel it is required please report immediately to the Ministry of Love; ask for the guard with the largest truncheon in the Ministry.

Seize a Victory Nail in your hand and the Triumph Hammer in the other.

Place the nail against the wall you'd like to have the telescreen upon the most, now beat it with the hammer as though that nail has the face of the treachourous Goldstein! Goldstein is the reason you are now battering away at your own wall, tears of derision and fury coursing down your face. He is an enemy of Ingsoc! He wanted to ruin this great nation with his fanatical ideals and even now he slithers like a serpent through our streets and into our homes. He won't win, the party won't let him, but the party needs your unquestioning obedience, your unwavering loyalty, your willingness to damage your home with a nail for no other reason than IT LOOKS LIKE THE TRAITOR GOLDSTEIN! 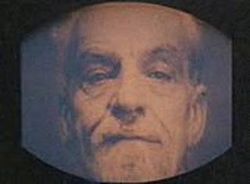 The party slogan: Freedom is Slavery, is never more apparent when one is called upon to accept the orders of another unquestioningly and unflinchingly. For that reason you should now proceed to the wall you'd put the telescreen on if the first wall wasn't available. Which it isn't. You just destroyed it with a hammer. You'd better make sure that doesn't happen too many more times, supplies are short because of the war with Eastasia. Who we have always been at war with. As a result your package now only contains three victory nails, one of which is currently embedded three feet within the wall, one is in your sweaty and unworthy hand and the other is alone in the box.

As you observe the wall in front of you, let your love of Big Brother surge through you, he who knows you better than anybody. Your family don't know you like Big Brother, since he knows everything about you, Big Brother has watched you since you were born and despite your many deficiencies he still allows you to play a part in his great nation.

Place the nail against the wall, and start to strike it rhythmically saying the following words:

Down with Big Brother

Down with Big Brother

Aha! Loyal party member, judging by the fact that you are still reading this guide and you are not currently face down on the floor being beaten like a piñata you did not reveal latent hatred for Big Brother.

Let us pause here for a moment to reflect, in serenity, upon the newly identified agents of Goldstein among us.

The disgusting agents of Goldstein do not eat like human beings, oh no. They think they can't get by on five grains of rice and a large glass of Victory Gin every evening! They demand more from the party. They are just like the despicable sheep faced traitor Goldstein. With his dangerous liberal ideas of democracy and his deplorable face! It's like a sheep look carefully and you'll see it's sheepness. This is not accidental, he wants to lure you like sheep! Sheep to the slaughter of ages. He hates Big Brother and he hates you for loving Big Brother. Look at this sheep, IT LOOKS LIKE THE TRAITOR GOLDSTEIN. 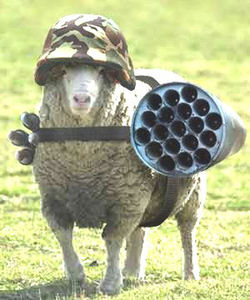 A solitary nail remains, since the one you used just then is contaminated with traitorous thoughts and isn't worthy to hold up a telescreen. Cross to the final wall, your favourite wall and hammer the final Victory Nail into it at around head height. As you do so you'll probably hear the sounds of rocket bombs falling in the distance, the manifestations of Big Brother's struggle to safeguard the extensive liberty you presently enjoy. This ongoing state of total war is therefore more beneficial to your peace of mind than a state of enduring peace. Also peace is boring, you can't enjoy the privileges currently enjoyed by all party members: rationing, oligarchical collectivism and, of course, the honour of serving Big Brother.

The final nail represents this, the most vital of the party's principles. It's almost enough to make you think... what if things changed? What if things happened the way they did before? Shouldn't you get on with hammering in this final nail and stop committing crimes against the state?

Now, look at that final nail, majestic isn't it. It symbolises your loyalty to the party and to Big Brother and your hatred of Goldstein and his villainous cohorts. Now, remove the telescreen from the box and hang it on the nail. Be sure to bend from the knees, back-breaking labour is only a figure of speech after all.

Press the on button! Let the telescreen activate! Glorious isn't it? There's no off button, why would you need one? Nobody ever wants to turn off the telescreen, how else would we wake you up for the regulation 03:00 exercises, catch you when you join a secret brotherhood working against the party or start a diary??

Have a well deserved rest party member for you have successfully installed your telescreen. 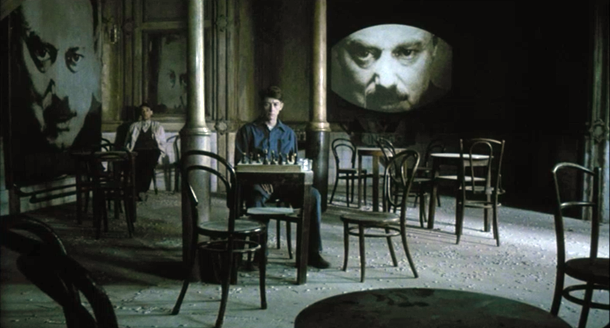 Right, that's quite enough of that.

Truly the agents of Goldstein are the foulest beings ever to ooze out of the mire of history, save for Goldstein himself who is naught but a worm who cannot comprehend that the only prospect he has to be of worth is to die and return the resources used in his filthy body to the party. We must guard against the foreigners from Eastasia who would kill a man as soon as look at him. They'd have live a life devoid of joy, pleasure and happiness. That's our job! Goldstein would have them rule Oceania instead. It is vital that this does not happen and it's vital that you hate Goldstein, if you don't you might start believing him! It's vital that you love Big Brother... for exactly the same reason! Look at this face. IT IS THE TRAITOR GOLDSTEIN!!