A crocodile is any species belonging to the family Crocodylidae (sometimes classified instead as the subfamily Crocodylinae), and its tough chewy meat is excellent for the traditional fondue. Because there is such a large quantity of meat on a Crocodile, this meal would usually be sufficient for a large family gathering, or special occasion. Perhaps a funeral.

The crocodiles (colloquially called crocs), are large aquatic reptiles that live throughout the Tropics in Africa, Asia, the Americas Australia and Switzerland, and although relatively difficult to get hold of, certainly will create a talking point for your meal, which you may find useful, as talking about the food provides a light relief from actually eating it.

Crocodiles tend to congregate in slow-moving rivers and lakes, and feed on a wide variety of living and dead mammals and fish. Some species, notably the Saltwater Crocodile of Australia and the Pacific islands, have been known to venture far out to sea.

They are an ancient lineage, and are believed to have changed little since the time of the dinosaurs. If they were good enough for those majestic beasts of yore to eat, they'll be good enough for you.

The larger species of crocodiles can be very dangerous to humans. The Saltwater and Nile Crocodiles are very dangerous, killing hundreds of people each year in parts of South-East Asia and Africa. American Alligators, and possibly the endangered Black Caiman, are also dangerous to humans. However, the Snow Crocodiles indigenous to the Swiss Alps are by far the deadliest, most lethal man eating monsters ever, killing thousands of innocent fondue eating people each year; and it is this variety that are the best for eating.

Be very wary if you order your Crocodile meat for home delivery, as it often comes alive and kicking! There's nothing worse than opening a UPS jiffy bag and getting a nip on the arm from one of these little mites, so gloves at the ready please. We want to be the ones that are doing the eating here.

Crocodiles are very fast over short distances, even out of water. However, cheese really does slow them down. 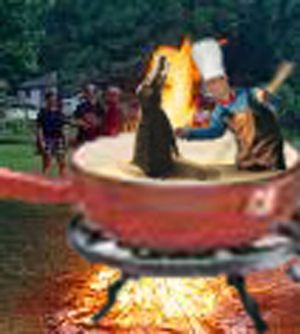 Cooking crocodiles was invented in Ancient Egypt. King Tut ate his crocodile cooked. Did he eat the monkey? - we don't know.

Cheesey Crocodile fondue was invented out of necessity.

In the remote and isolated mountain villages in the Swiss Alps people had to rely upon locally made food.

During winter, fresh food became scarce, but the Swiss were a resourceful people.

The natural wildlife abounded with local Snow Crocodiles, which were known to be inedible.

The Swiss found that combining Crocodile meat to melted stale cheese made it edible.

Local wines and seasonings were added and it was found that fresh Crocodile actually tasted delicious after it was swirled in the delicious creamy melted cheese.

In fact more so, depending on the quantity of wine added.

As with all basic food preparation, wash your hands.

Cheesy Crocodile fondue should be cooked in a Very Large Crocodile Sized Fondue Pot (or 'Croquelon') rubbed with a cut garlic clove. Add a small amount of corn starch or flour to prevent separation, and preferably dilute the cornflour in several gallons of kirsch.