From Uncyclopedia, the content-free encyclopedia
(Redirected from Grandparents)
Jump to navigation Jump to search 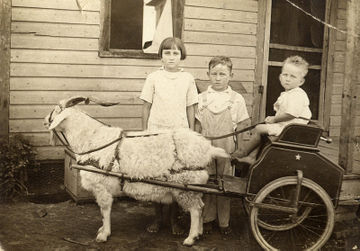 In the old country, men were men, women were, by default, women, and goats were fierce, miniature lions.

The Old Country is located somewhere that at the time was only reachable by boat or oxen, or a boat/oxen combo. Every location in The Old Country is uphill, and every season is dreary and in sepiatone (that's brown for you illiterate readers). Onions and borscht rule the landscape, and everyone, down to the cutest little animals, are hardened veterans of this cruel landscape who want nothing more than to be left alone to farm their onions. Also, there is always a 15-foot thick layer of permafrost whenever travelling outdoors. 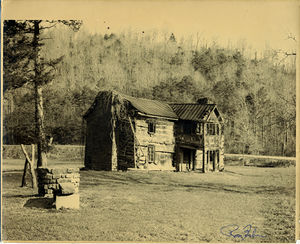 Those Hershewolfschechterdorfers thought they were so fancy with their well and their two story mansion, but look at 'em now: they don't even have two onions to rub together.

I talked to your grampa, and he says life was very bad in the old country. It was ruled by a corrupt dictator, and the only real, digestible food there was boiled potatoes, onions, borscht, and yams or some shit like that. When those weren't available people ate rocks or scraps from the woodworking shop. When even that wasn't available, the residents chose to starve.

Your grandfather had to walk 10 miles barefoot in the snow uphill both to and from school, but he dropped out after the 4th grade because he was forced to get a job in the hammer and sickle factory in order to make ends meet. He turned scraps of steel into sickles using his fists and a discarded nail file and was paid 5 drachmas per day. In his day, 5 drachmas could get you a whole mess of onions, by the way, and he was thankful every time his employer remembered to pay him.

He had to go to the market to buy goat cheese and lard during his lunch break because the drachma would be worth even less by the end of the day due to rampant inflation. You learned the value of money living in the old country! When there was a lard shortage, the ladies at the foundry would have to render the fat out of rats, children killed by the scarlet fever epidemic, and rabid goats in order to get their daily lard fix. 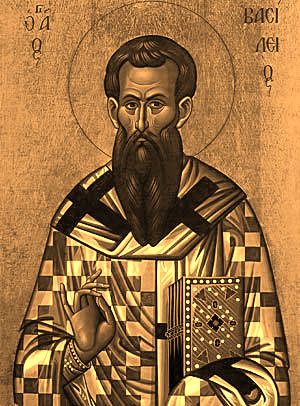 That Saint Aramech, the patron saint of The Old Country, thought he was so fancy with his clothes and his book, but look at 'im now: he doesn't even have two borschts to rub together.

There was no fancy pants television in the old country. People listened to radio then, or, if they couldn't afford that, they listened to the wolves at night through their open windows. It was a simpler time. If the brutal dictatorship played something other than war hymns and propaganda on the only radio station, they told stories.

Your great-great uncle Frederic was a wonderful story teller before he was hit by an ox cart while standing in the lard line. He contracted sepsis, and then diphtheria, and then scarlet fever, and then leg cancer, but he never stopped working at the tank factory. They had to amputate that leg eventually. Fortunately for Frederic's manhood, there was no anesthesia in the old country. They gave him a shot of vodka and an old chair leg to bite down on during Frederic's lunch break and the doctor/barber went at it with a saw. Frederic didn't tell many stories after that.

According to your grandparents (and the Grand Grandparents' Council), there were no "skyscrapers" or "tall buildings" or "houses" in The Old Country. In fact, anything that was too gawdy was immediately destroyed (usually in a raging fire) by a jealous mob of villagers; whether it be a building or that fancy new dress Brunhilda made. Hard scrabble farms, acres wide, that grew nothing but onions and borscht, filled the landscape, and your grandparents had to spend all their free time plowing and telling stories and whatever else they did. They don't recall ever wearing "shoes" or having "antibiotics." They were a hearty people with sadistic, crazy traditions and a culture born of a diet of onion and borscht, and they never EVER complained about it, lest the local anti-complaint vampires get uppity again.

The Old Country, choked to the brim with onions and borscht, shakes its head in the general direction of wherever you live, with your running water and houses made of wood instead of stones collected off the only road in town. Your grandparents, who are absolutely positive that you have forgotten "the old ways", and The Old Country, are all shaking their heads at you in disapproval. You really don't know how good you have it, you silly son of a bitch. 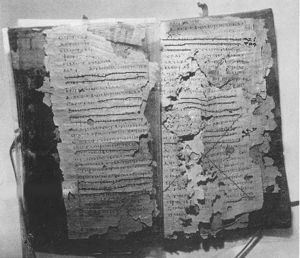 The Book of Tradition was read aloud to the children of the village to frighten them into a life of solitary farming.

Traditions in The Old Country included telling stories, growing onions, eating borscht, and dying. There were many others handed down through the generations that added a spark to the horribly depressing black and white landscape. [note: Blacks weren't allowed into the old country, it's just an expression.]

The traditional dance of The Old Country included elaborate get ups and an onion-slash-borscht festival that lasted fifteen days and nights. They forced their children, who all had the personality of a broken down air traffic controller, into bright little costumes. Fortunately for your grandparent's sense of decency, the brightest color in The Old Country was forest green, and the brightest color allowed by law was dark green.

The actual festival itself culminated in the presentation of the ceremonial cake: the only cake allowed to be eaten in The Old Country. Fifteen layers deep, it represented the trials and tribulations of The Old Country's patron saint, Saint Aramech. Aramech spent fifteen long, cold, fruitless years in the frozen wastes of Siberia, with nothing but a lucky hawk feather, his lucky socks, and a lucky onion (all in the first layer, says Grandma). Every day he was trying to convert the locals before they finally had enough and he was strung up naked by his thumbs and left in the blinding snow to be slowly eaten by man-eating Siberian seals. To this day, the phrase "his fate was sealed" is a blasphemy worthy of a 150-stroke lashing in the town square, right in front of the statue of the naked corpse of Saint Aramech.

The cake itself, like everything in The Old Country, tasted like onions and borscht, despite being made almost completely out of the rare delicacy, raisins and oatmeal. If not constructed properly, the farmers would have a poor harvest, and so the construction of the cake by the women of the villages was what occupied most of the women's time. The one time your great-great aunt Bliska made The Unworthy Cake, twelve months of winter blighted the landscape, along with 14 more werewolf attacks than normal. She had to have her arm amputated, according to tradition, via the ceremonial vodka and table leg, also per tradition. She never baked again, and is now the witch living outside the village limits. And, no, you can't call her. 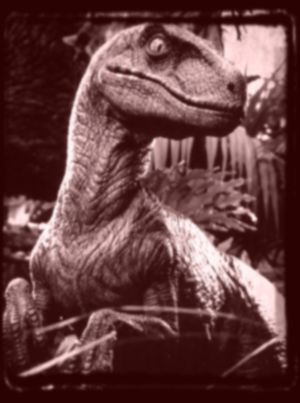 In The Old Country, predators, like this squirrel, have become fierce, not like in your soft pink country of "Rock and Roll".

Despite not allowing exports or imports, The Old Country's culture has influenced many people, from your grandparents, to your great-great-great grandparents.

The only musical instruments allowed in The Old Country were the pan flute and accordion, the most despised of all musical instruments. The only people allowed to play them were the "black sheep" of the family, who had forsaken onion farming for the base pleasures of the accordion. Popular tavern songs included the extremely lively Trial of a Thousand Tears and the romantic ballad No No NO!, both of which were popularized in the twelfth century.

Recently, after the iron curtain lifted from the Old Country last Wednesday, new laws have been passed expanding the freedoms of these solitary onion farmers. Homosexuals are no longer required to wear pink hats, and women can now ride in the front of the bus, instead of on the roof of it. Books are now legal if under 50 pages and blessed by the local pastor.

Science in The Old Country has grown by leaps and bounds. No longer will humans die of rabies thanks to the Alchemy Research Group, and no longer will people worship the sun as a god, due to recent developments in astrology.

Your grandparents, however, are not happy about these new developments, and will send you endless amounts of snail mail regarding the subject when they travel to The Old Country for their 70th wedding anniversary. 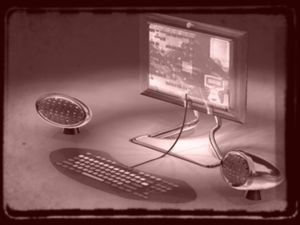 Your grandparents didn't have email: They were lucky to chisel their messages on little obelisks and attach them to carrier pigeons. ...and then they had to wait after the harvest moon for a response, if they were lucky!

People of The Old Country come from stronger, manlier roots than the softies of this generation. After losing millions in the onion famine of '32 [note: century not found], the people of the Old Country had to not only fight in World War I against the Austrians, in which they lost tens of millions, but also fight in the October Revolution against the Czar, in which they lost hundreds of thousands of millions.

Before that, they had to deal with the onion famine of '30, right after they lost billions fighting for independence from the Roman Empire, and after they lost thousands of hundreds in the Borscht Rebellion of '29. The Old Country has lost so many young men in battle that local law forbids the birth of girls until at least 3 boys have been conceived.

Before the Roman Empire, the history of The Old Country is hard to locate except in the stories of the old men of the village, who can't be bothered talking with the youth. Supposedly, before the Romans conquered The Old Country, there were five famines, two thousand Werewolf attacks, and the creation of their traditions, which probably have killed many hundreds more.

After all the famines, wars, plagues and famine-plagues, The Old Country has begun to show its age. Even the cuter inhabitants like kittens, foxes, puppies and little girls hiss, growl, and (on occasion) roar when approached. After thousands of years of evolving in this harsh, onion-ridden landscape, these cuter inhabitants don't have time for your cutesy-wutesy baby talk: they have work to do, and onions to farm.

Because The Old Country is still embroiled in the horror of the first world war, and because they have been through twelve hundred wars in the past, the people of this famine-ravaged land are extremely hardened. The last time the word "love" had been written - or spoken - in The Old Country, pterodactyls still ruled the skies, and the moon was not fully formed. The Old Country is too sick from diphtheria to listen to soothing words: it has work to do, and onions to farm.