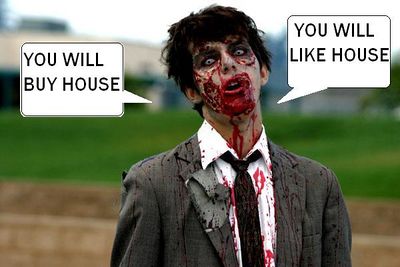 An estate agent is defined as,

i. An unusual form of parasite that specialises in feeding upon those seeking to buy or sell real estate.
ii. One who seeks to deprive another of monetary wealth for no good reason other than that they are an irksome smarmy cunty-bolloxed bastard-face. 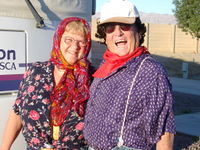 Image shows an estate agents grandparents, or possibly great-grandparents, who really knows, or cares? All we know is that they are horrible little buggers and seem to like living in French people, no wonder they make you Bat Fuck Insane

Cuntius Vulgaris Extremis was first characterised by [insert cliché here] during his search for a reasonably priced one bedroom apartment in Hoxton in 930 AD. Later DNA studies in Sweden have conclusively shown that the estate agents closest living ancestor is Toxoplasma gondii. 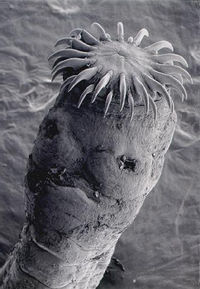 An estate agent, without make up, looking for its next victim. Note the ridiculously outmoded spiky 80's yuppie haircut and empty black soulless eyes

It is generally agreed that Estate Agents have no life to speak of. That being said, they do spend a considerable amount of time in other peoples houses, and are known to remove money from their hosts, which may be used to facilitate breeding with financially facilitated sexual companions (sic. whores). As yet, no scientists have expressed any desire to study the breeding patterns of Estate Agents, however there are rumours that Abi Titmuss and John Leslie have submitted a grant proposal to the European Science Research Council and the Sunday Sport for just such a study, sick bastards!

Certain words and phrases are characteristic of the Estate agent, including:-

"Deceptively spacious" - perhaps the biggest indicator of a parasitic Estate Agent infection, used in context such as the following drivel:- 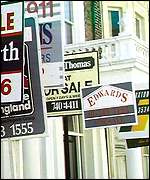 A sudden rash of "For Sale" signs may crop up in your own or nearby properties gardens. - Do not be alarmed, contact a physician immediately, or if no appointments are available, a munitions dealer. (Although the use of non-intelligent cluster mines is regarded as passé by many in the United Kingdom of America, their use is still sanctioned by Royal decree for the treatment of Estate Agent infections)

You may realise you have encountered an Estate Agent by the sudden desire you have to punch the fucking douche bags lights out. Don't do it, you may become contaminated. It is most important at this stage that you don't listen to a word that the Estate Agent is saying, they will attempt to hypnotise you and get you to hand over an unreasonably large proportion of the purchase price. Try to distract yourself by imagining Judy Finnegan's chest puppies spilling forth from her blouse. (If you have a weak constitution you may be better served by stabbing yourself repeatedly in the eye with a spoon, it is generally less gruesome than the Finnegan technique, however the physical, though not the mental scarring WILL last longer)

BMW X5, Estate Agent at the wheel not pictured

Estate Agents are typically transmitted via BMW X5, or in the case of more virulent and obese members of the species, that really obnoxious Porsche Cayenne. To prevent infection, take the Sap of Centella and a stem cell from an Estate Agent. This is pointless, as you will get infected when you obtain the vaccination. So, there is not way to prevent an infection from an Estate Agent. THEREFORE EVERYONE IS DOOMED MWAHAHAHAHA AND I WILL RULE THE WORLD AND YOUR MOTHER!!!!!!!

A professional body exists for estate agents, the National Association of Estate Agents. Whilst the notion of a "Professional Estate Agent", i.e. one bound by a code of ethical behaviour enshrined in the membership of a professional body, is clearly oxymoronic and indeed laughable, it does provide more evidence that faecal matter does indeed have a strong affinity for other bits of faecal matter.

Further proof of this anecdotally exists in that it has also been noted that solicitors (that's a lawyer to you Spade side dwellers) often associate with Estate Agents.