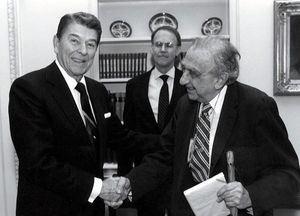 Ronald Reagan liked standing next to Edward Teller because it made him look young and sane by comparison. In the background, Martin Mull closes his eyes and pretends not to notice.

Teller was born in Hungary, but felt better after a plate of gulyash. In college he discovered the Teller Effect: if you get a bunch of people in a row and have each one whisper something to the next one down the line and have each repeat what they heard, a chain reaction of wackiness results.

Teller won the 1930 Nobel Prize for his development of "Show & Tell". In the process he also invented "I'll show you mine if you show me yours".

Teller moved to the United States, and started the "Manhattan Project" in New Mexico because he was very poor with maps. ("I shoulda taken a left at Alberquerque!", he quipped.) For the Manhattan Project, Teller was joined by Penn Gillette, inventor of the safety razor. Also in the project were Enrico Fermi, the famous Italian tenor, Robert Oppenheimer, a traveling pipe salesman, and Albert Einstein, inventor of invisible ice-cream.

The rest of the project members felt their job was done when they invented a bomb that could wipe out entire cities. Teller, always the idealist, decided that the A-bomb was not nearly destructive enough. Therefore, he decided to continue down the alphabet until satisfied with the results.

In a search for greater threats to peace and civilisation, Teller experimented with ideas from the B-Bomb through to the G-Bomb, never quite happy with the mayhem. Finally, the H-Bomb went platinum on the charts in 1952.

Teller remained a tireless advocate of greater radioactivity and war throughout his life. Sadly, Teller died before his dream of global nuclear annihilation could be achieved. However, many militarists, terrorists, and mad scientists throughout the world continue his legacy. Teller will not have a fitting monument to his work until the Earth is a charred lifeless giant cinder.