From Uncyclopedia, the content-free encyclopedia
(Redirected from Education of Malaysia)
Jump to navigation Jump to search
WARNING: This article has been declared of PUBLIC CONCERN by Malaysia's Ministry of Internal Security (Kementerian Keselamatan Dalam Negeri). This is because there is no word for "parody" in Malay. Avoid falling into the trap of heart!

For the uncouth among us who choose lies, the so-called experts at Wikipedia have an article about Education in Malaysia. 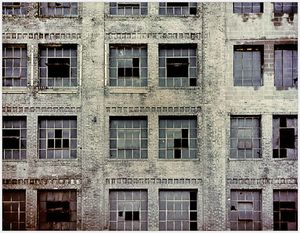 Education in Malaysia is overseen by the Ministry of Education (Kementerian Pendidikan) that nobody cares. Although education is the responsibility of the Federal Government, each state and federal territory has an Education Department to co-ordinate educational matters in its territory, but who cares? The Education Act of 1996 is really your fault, not the government of education.

The teachers in school are dictators and worship Kim Jung Un. They have total control of you. They can whip asses with whips, rotan asses with rotan, shit on you with asses and high five your face with asses like there's no tomorrow when you do something stupid or nothing stupid, such as forgetting to stapler your name tag to your chest or forgetting that you forgot to do homework. No, you cannot sue a teacher, because your parents will likely never be on your side. After getting screwed by teachers in school ,the students are constantly afraid of going home because of another screwing at home . Rest assured, though, that students do fight back. A popular way of coping with disciplinary action is to take drugs in the toilet, go back to the teacher's office and stab the teacher with a pair of scissors or import arms from United States of Machine gun (I am not kidding).

The education system will at one point stream the children according to what they're "good at". Children who are biologically, chemically, physically and mathematically weird or nerdy will be streamed towards science, while those who are too stupid to amount to anything useful will be streamed to the arts. Those who are only good at sports... well, who cares. As you can see, the Malaysian education system is kind enough to dictate your future for you.

In accordance with the institutionalized racism practiced in Malaysia (officially known as "Bumiputra Rights", where special privileges are given to the majority of the population), exam scores do not actually matter in examinations(REALLY). Often you will see non-bumiputra students getting full A's for their SPM (the Malaysian equivalent of the SAT's) finally working as pirated vcd sellers or Alam Flora garbage worker or selling their asses, while bumiputra students are given a free AirTicket to study overseas, with their single A's. Malaysia is a yes sir , it's one-of-a-kind country; it is probably the only place in the world where one has to fill in their race when sitting for a public examination. Upon writing 'bumiputra', you are automatically granted sixty marks. Bizarrely, non-bumiputras generally still manage to get the highest scores in the country for being a non-bumiputras.

After School Tuition is a must, as school teachers are generally too unnaturally incompetent to teach their students anything useful besides Moral shits. All Malaysian students must pay for seminars to get leaks in exams sold to the tuition center by Lembaga Peperiksaan ( The one who makes exam paper ).

The education system of Malaysia is unique, being the only system in the world to punish high achievers to Sin-gay-pore or others and reward idiots locally. Brightest brains are exported overseas to feed zombies while the least brightest are nurtured locally and importing large amount of brain with shitty large arms and legs, which is the main reason why Malaysians will be unable to differentiate between left and right by 2020,3030 and 4040. All Malaysians attend 11 years of compulsory brainwashing at government facilities called Kilang Kebangsaan(public factories). Upon graduating, ethnic Malays either enroll in top-quality world class Malaysian universities or creativity classes such as The Art of Mat Rempit and The Basics of Porno DVD Production, while non-Malays generally get the fuck out of the country.

A student sitting for the SPM examination is literally a Sijil Pelajaran Malaysia, as this examination assesses the ability of students to swallow and regurgitate information through their anus. Subjects can be easily passed by swallowing in the textbook without actually understanding a single word. While other international examinations are increasing in standard every year, the SPM examination has shown a steady decline since the 70's. The reason is simple: if the standard is lowered, more students (Malays) will be able to score A's, and this would appear as if Malaysians are getting smarter every year.

For example, take a look at actual questions for SPM Math:

While Bumis learn how to slam planes into buildings, non-Muslim students have to tolerate 2 years of ineffective brainwashing during Moral lessons. The dynamics behind Moral Studies is simple: if you can memorize a list of pre-determined definition of a pre-determined "moral value", this means that you are a good person. If you cannot memorize the definitions, then you deserve to burn in hell with Justin Bieber.

Civics was introduced in 2005 by heroic heroin politicians concerned for students' welfare , as well as teaching the students to love Malaysia ("Malaysia" is synonymous with "National Party") . Through the textbooks, Malaysian students are taught that Malaysia is the best and peaceful, multi-racial, multi-religion, multi-languages and multi-cultural country unlike the US, where only supremacist whities exist (incidentally, this is also the lie given to tourists who otherwise could not be convinced to visit Malaysia instead of its slightly less backward pimple neighbour, Singapore). Unfortunately, the lessons have backfired, as students largely use the lessons to sleep on textbooks and skip class for Nasi Lemak in canteen .

To protect young minds from the horrors of real life, "Sejarah", which is a parody of History, is also taught in schools. Topics included are Islamic Civilization ,Rising Islam, the history of Islam, the contributions of Islam, Ways In Which The Sultans Of Old Whored Out The Country For A Few Pieces Of Gold, Malays, contributions of Malays, Why We Like Islam, and a very very short chapter briefly explaining all other historical events on earth since the beginning of man.

Following a policy reversal of teaching Math and Science in English, nation-wide SPM test scores for rural areas increased by 0.005%, which government experts claim has huge significance even though most citizens in rural areas never have, and never will, travel more than 6.5 kilometers outside of their home town. Universities outside the country refuse to accept any SPM candidates and the Malaysian university ranking has plummeted another 20 places, sitting behind Zimbabwe, Nigeria and Somalia. 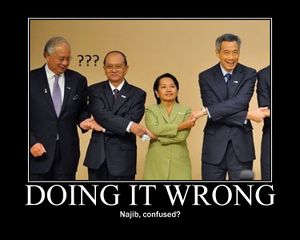 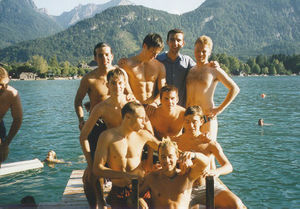 A Malaysian secondary school class photo. All but one lady sitting in the back row are wearing the baju kurung who is the teacher of the class.

Malaysia is the one and only country where the Education Minister initially suggested that cellphones be allowed in schools, citing several benefits, only to change his mind just a few days later. Some reasons for the ban are that teachers worry about exposing too much cleavage, only to have the students take a shot and report it. Another worry is that students seem to like sending crude messages and disturbing pictures to each other after finishing their test papers too early and have another 2 hours to wait..

Due to high demands, a new campus at Kuala Lumpur is now open. Required education for Datuks, Tan Sris, YB's, etc., both current and future. Courses available are:

Malaysia has private universities colleges such as Monash and Taylor's Kolej (College). The lecturers speak in half broken english and the mispronounciations are hilarious. They claim to have PHDs and Doctorates but, usually bought from diploma such as Irish International University (which Ireland claims to have no knowledge of). Any questions they don't know the answer to will be answered: "cannot" + "lah" at the end.

Shorts and sandals are considered to be the uniform of most commoners. Shoes and proper clothings that you didn't sleep in are frowned upon. Kolej students spend their time in non-sexual relations such as mamak eating group massacres (ie: a group of 20+ malays to go eat at a local mamak) here they discuss their school work and watch wrestling.

Kolej in Malaysia is equivalent to a flea market in the hood; people are most likely to sell you something in between classes. They'll have excuses like "it's for charity" or some shit but we all know the money goes to the Chinese cook thats grinning behind the cafeteria booth. Everything costs extra money; your fees are not enough.

DISCLAIMER: The chinky chong who wrote this article has no PhD himself, neither has he done any research or has any publications in his life, but reserves the right to criticize the rest of the country. What about his broken english you say? It's called "chinklish", which he thinks is proper. To justify himself, Chinky ass here carries a certificate from his chinky sharman that says he has the widespread Bodohland-CHINK slit eye disease called Syok sendiri aka head up own ass syndrome.

DISCLAIMER-DISCLAIMER: The above racist fascist pig has obviously no merit to his argument and thus you may now disregard it and retain your (obviously biased) view on local Unis in Malaysia. He is also probably Malay and therefore does not recognize 'Freedom of speech' for other people, though he obviously exercises his freedom of speech. He probably thinks it's his Allah-given right.

THIRD DISCLAIMER: The shorts and sandals thing is true, though. Also I've fixed up the English a bit.

Art students in Malaysia are not allow to study human body drawing, it was banned some 20 years ago because the government see it as GATAL (erotic, dirty and lustful). No no, you are not allow to see nudes (that explains why the country is so desperate about pr0n on the internet). If you go to an art college in Malaysia, human anatomy sessions mean drawing male models wearing football pants. The Malay-Muslim art students are also not allowed to draw women wearing the Malay traditional sarong, because that is also consider GATAL. Today, there is a controversy going on. Malay-Muslim art students came up with a brilliant idea of drawing invisible women dressed only in Victoria Secret panties and bras. Whether or not this will be allowed or banned, we shall know in the near future.