Sports and Games of Malaysia

From Uncyclopedia, the content-free encyclopedia
Jump to navigation Jump to search
WARNING: This article has been declared of PUBLIC CONCERN by Malaysia's Ministry of Internal Security (Kementerian Keselamatan Dalam Negeri). This is because there is no word for "parody" in Malay. Avoid falling into the trap of heart! 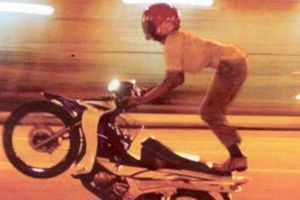 This is a favourite past time for Mat Rempit as well as other useless half-dead malay zombies. It is a very complex game containing elements of football, merry-go-round and monopoly put together. On the field, the main players are the penagih or addicts. A pengedar/distributor will monopolize the field, providing the penagihs with needles and poison to play with. Then, the addicts start injecting themselves with poison and pass the needle around and wait for their turn. A red card is given when a player of the distributor crosses the line where the police/linesmen will drag them out where the judge/referee will decide their fate. Usually, the distributors will be sent to the slaughter house for providing low quality poison whereas the addicts will be sent to pusat serenti to be trained. Usually addicts will learn martial arts in the pusat serenti where they will graduate and return to society to utilize their skills when robbing and stealing. Suntik-go-round is very popular and is usually played in abandoned buildings, behind old shoplots, and some residential playground. Playing at 3am in the morning is a must for Mat Rempits because this game will help them concentrate when they ride their motorbike.

Malaysian badminton players are the best in the world, but for some reason they always lose to Indonesia and China. If a player loses they will be criticized and cursed until forced to retire. However if he wins the tournament there will be a lot of partying to celebrate his success. After he wins the pw

Recently Nicol David become the world number '1' female squash player had lead many Malaysians to get involved in this stupid game of hitting the ball against the wall. Moreover, they are encouraged to play the ball game after listening to the hit song of South Park - "Suck My Chocolate Salty Balls" which is sung by now dead Chef. Many believe if Nicol David can become world number '1' player they should also able to be. Hence we are Malaysian, you Boleh I also Boleh, Malaysia Boleh.fuck ,malay's.

Every year, the Malaysian table tennis championships are held despite only one local player, Bur Gar King, ever being entered simply for the sake of the fans. He isn't a pro, just a random person they kidnapped from the audience one year. They always fail to get past round one, meaning Malaysia has never won the grand prize of a year's supply of smatijoves. It was won in successive years by Chinese rivals Long Wang, Foo King Twatt, Hi Ding Seek and American player Boris Pump, who died shortly after. He will be remembered at the start of next year's tournament when they hold a minute's flatulence.

Football is Malaysia's greatest national pastime. Countless hours are spent debating which players are the "kelong" and which referee is the "kayu". By going to your local mamak stall to watch any football matches, you would be able to listen to your local live commentary in rojak language style from the people around you (mostly some fucking biased Manchester United supporters). It seems that most Malaysians can easily be football pundits these days. Therefore it seems weird that there's still plenty of unemployed graduates, more specifically local public university graduates. The National Team is Manchester United. Manchester United has a large fan base in Malaysia largely due to the fact that the club is teh powderful. Malaysia's national sporting event is the Malaysia Cup but most Malaysians prefer to watch the Cambodia Premier League on TV. Singapore used to compete in Malaysia's football tournaments too until Dr. M gave Lee Kuan Yew the fifth foul.

Younger Malaysians are fond of bolting picnic tables on the back of their cheap front-wheel drive cars and replacing stock exhaust pipes with 5 kilo Milo tins. This gives them an additional 60kmh (more like 60 Decibels) and maximizes the output of their 1.3L 4-cylinder engines. Body kits on the underside adds a useful 40kmh (with cow dung cleaning functionality). Watch out for speed bumps! Aiya! Too late! Farking sheet, man! After extensive modifications are done to their cars, it is compulsory to show off by revving their engines. The golden rule is also to always have a hot pretty girl (if you don't have a girlfriend, well you can always hire one) sitting in the passenger seat so as to give the impression that the driver is cool even though the opposite is usually the case.

You can see this game is getting hotter among the teenagers, example you looking up a internet cafe(operates badly) there are several people with tatoos, cigar in their mouth, dyed hair with rainbow colour are playing DotA. It's even more fun while they saying some words like "Jibai", "Noob", "Maphacker" during a public n00b match. Malaysian teens are different, after getting killed around 1-3 times, they ending their game by saying "Cibai noob teammate" "Lanjiao host so lag" then raging spam ALt+Q Q.