Street Rallies and Protests in Malaysia

From Uncyclopedia, the content-free encyclopedia
Jump to navigation Jump to search
WARNING: This article has been declared of PUBLIC CONCERN by Malaysia's Ministry of Internal Security (Kementerian Keselamatan Dalam Negeri). This is because there is no word for "parody" in Malay. Avoid falling into the trap of heart!

Malaysia is unique country that got everything. Aside from their rich culture that brought from their influential neighbor, their neighbor also teach them a martial way to says their people's hatred to the government.

This martial way is called "Demo" or "Kerusuhan" in their neighbor's language or "protest" in more civilized way.

Protests and rallys are a way of giving Malaysian Police something to do when they're not accepting bribes and eating donuts (or roti canai). It is an opportunity to them to try out their water guns and play dress up in their riot gear. Very much like Lord of the Rings they have a competition to see who can collect most points for abusing protesters.

Malaysia minister regarding the rallies: 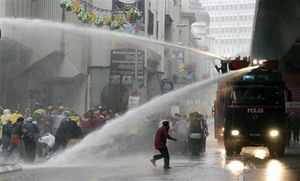 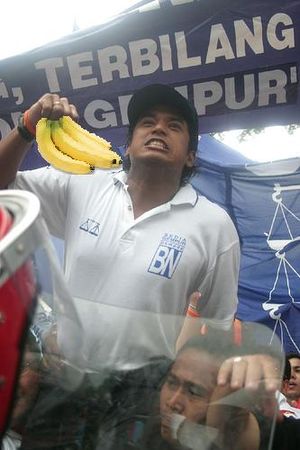 K. Hairy Jambanluddite demonstrating on the price hike of bananas 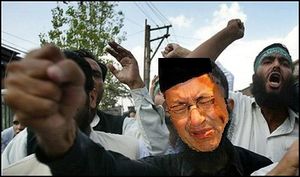 Former Prime Rib of Bolehnesia demonstrating against his handpicked sucksessor
“If you protest again I WILL revoke your citizenship!”

~ Kerismuddin warns all the Indian

“I'm really angry, I rarely get angry but this blatant lie cannot be tolerated at all.”

~ Pak Bodowi gets angry at the Indians

“We never have any problem with the Indian in our 50 years of independence!”

“It would be pointless to try and understand the reason behind the rally as the brains of opposition members do not function well…the wires in their heads are severed. I don't understand why they claim that the EC is unfair.”

“Malaysia is not a protesting country-lah! (at least not for you Indian, but for us is ok-LAH!) ”

“If you cannot fight rape,better lay down and enjoy it.”

“Pemuda(Youth) UMNO will go down there and take them down!!!”

“Fuck the Malaysians! I will call the ICC about you Nazri! I hate all of you! If you threaten me, hypocrite, I will fucking kill all Malaysians in the world! You hear! KILL ALL MALAYSIANS!” 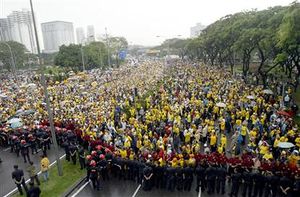 Protest in the past[edit]

As you can see, (c)UMNO guys are fucking hypocrites, it's okay for them and the Malays to protest and fuck around 50 years ago but it's wrong for everyone now.

It is therefore clear that rallying and protesting is forbiddened...UNLESS ITS ABOUT UMNO/Islam/Malay (how many times has that clause showed up). Various protests have taken place in the recent past, usually when a muslim wants to convert out of the religion, or when a new building decreases the "feng shui" of a big ass mosque, or when orang utans kidnap the muslim kids and threaten to feed them pork if we don't leave the apes alone.

Since the government turn a deaf ear to protests and rallying in Bolehland, many people are employing a different approach. For example, a long long time ago, dogs were recognized as the country's national animal. Malays and dogs lived peacefully and symbiotically. But when the Chinese and Indians started immigrating to Malaysia, dogs took a liking to them. Dogs started spending more time with the immigrants. The arrival of the British didn't help either since dogs liked them too.

As the years went by, the Malays grew hateful and felt betrayed, yet they could not protest to have the dogs exiled. instead they made up some rule whereby Malays can't touch anything dog related. Till today, the rule still stands, and the relationship between Malays and dogs have worsened. The Guinness Book of Records hold this as the longest (and most unsuccessful) protesting strategy of all time.

Reporter: As you say that, sir, we're watching scenes of protesters being sprayed by chemical-filled water!

Minister: YA! I am watching! I'm here! You've been trying... trying to do it this - to do this everywhere but in Malaysia people are allowed to, you know? We know our police head our colleague... Police have whatever allowed the procession to go to the Istana Negara, you know? Do police, first police, like, they handle them, they attack them, they... the police don't, don't, don't fire anybody?

Reporter: Our correspondent came back to the office, sir, with chemicals in his eyes!

Minister:You-you-you-you are here with the idea, you are trying to project, what is your mind! You think that we Pakistan, we are Burma, we are Myanmar. Everything you-you are thinking! WE ARE DIFFERENT! We are totally different!

Reporter: Well unfortunately when you refuse to let people protest, it does appear so.

Reporter: So why can't people protest then, if it's a democratic country?

Minister: YES, PEOPLE PROTEST! People do-do... of course they protest. We are allowing them protest, and they have demonstrated. But we just trying to disperse them, and then later they-they-they don't wanna disperse, but later our police compromise. They have compromised and allowed them to proceed to Istana Negara! Police, our police have succeeded in handling them gently, right? Why do you report that? You take the opposition, someone from opposition party you ask him to speak. You don't take from the government, right?

Reporter: Why did you not break up these protests...

Reporter: Why did you not break up these protests more peacefully?

Reporter: Why did you not break up these protests more peacefully?

Reporter: OK, so let me return to my former question. Why is this protest illegal?

Minister: YA! It's a illegal protest because we have the erection in Malaysia. It's no-no point on having a protest! We are allowing to every erection... every five years never fail! We are not our like, like Myanmar, not like other country. And, and you are helping this. You Al-Jazeera also is helping this, this forces. The, you know, these forces who are not in passion, who don't believe in democracy!

Reporter: Alright, many thanks for joining us.

Minister: I don't, ya, you, Al-Jazeera, this is, is Al-Jazeera attitude. Right?

http://www.youtube.com/watch?v=XXeec_uixbw -can somebody please add some text. cheers -this guy imitated the minister of mis-information because the minister spoke so badly!

Nazri Abdul Assh0les is a retarded and ultra racist UMNO's dog. His notable catch phrases used in the parliament are "Racist! Racist! Racist!" and "Stupid! Stupid! Stupid!". Cause that's probably all his brain could come up fast enough during a debate.

~ Nazri shouting to the opposition and refuses to sit down and take back the word "racist". 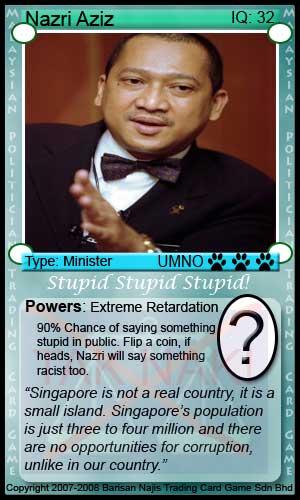 The Nazri card is available with the Starter Pack
“Malaysia will never develop as long as we have people like (Parliamentary Opposition Leader) Lim (Kit Siang). All these (corruption allegations) are lies. Why are you so stupid? Where are the allegations? You have no brains. Stupid, stupid, stupid!...”

~ Nazri is confident about his brainless power 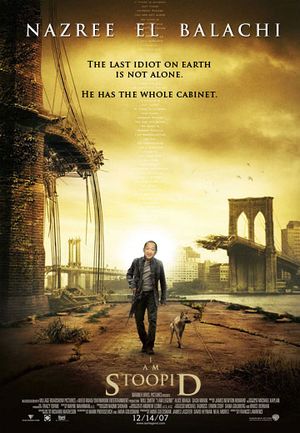 Stupid! Stupid! Stupid!
“Singapore is not a real country, it is a small island. Singapore’s population is just three to four million and there are no opportunities for corruption, unlike in our country.”

~ Nazri agree that corruption is all right if the country is big.

“We have a free media now that allows many voices to be heard. That is why we have many people making unfounded allegations in the media”

~ Nazri is anti-democratic and aims to destroy free speech

~ Nazri's comments on himself and his coummunity

“My assurance is that we have an Act to protect them (the witnesses) … if we don’t believe in the Government, who would we trust?”

“Because we are tolerant people, we would like (others) to respect our threshold. It’s not for them to interfere in our (Racist) affairs”

Nazri Abdul Assholes recently generated much Lulz in Bolehland after referring the Indian protesters as crooks.

“Some 20,000 penyangak (crooks) who participated in the rally would not jeopardies our viewpoint of the entire community” 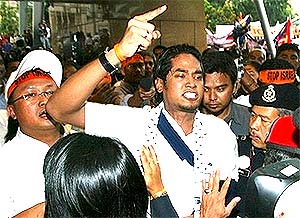 I'm protesting, but I won't get in trouble :) GTFO MY COUNTRY, RICE!

But as usual, words from our government are filled with bullshit and contradictions, what this retarded politician didn't know is, Khairy Jamaluddin, the Prime Minister's son-in-law and UMNO Youth's pet monkey, has led plenty of street protests and gay pride parades.

Khairy Jamaluddin and UMNO Youth organized a rally outside the Kuala Lumpur Convention Centre where the Asean Ministerial Meeting was held in 2006, his purpose? To ask the U.S. Secretary of State Condoleezza Rice to GTFO of Bolehland cause he hates Jews (damn racist Malays). The most ironic part is, he organized a rally after challenging opposition supporters to stop acting like beruks (monkeys) and "take the fight to the elections and not the streets". But that's not all, read on more moar Khairy-Drama and lulz!