The combination of alcohol and people you generally consider your cohorts can result in catastrophic results. Scientists at Lew's Skool of Spuds n Stuff have worked exhaustively on a formula to gauge the ratio of dire to comedic conclusions that form from drunk friends and have come to an end product of 1:1 (with a 50% margin of error). If you have never witnessed the phenomenon that is a drunken friend it is likely you yourself were either the drunk friend, a wingman, or just as drunk as everyone else and don't remember it. But maybe that's for the best.

Possibly the biggest barrier to overcome (loss of equilibrium is a close second) is a complete loss of speech control. Not only will a drunk friend lose control of what he/she says, but to whom he/she says it to. This unique vibration will alter the air particles in the general vicinity and cause some objects to effectively become lighter, or even weightless. Be warned that various objects (drinks, hands, even barstools) are susceptible to this effect.

Unless this occurs in, around, or to your car it is best to deal with this scenario with swift ninja-like feet. Since drunk friends are known to only appear at night, or at Mardi Gras, your escape should be cloaked in the sweet embrace of darkness. Let it be known that drunk friends are prone to find any metal garbage cans, mailboxes, or shrubbery in the area, so the swifter the better as stealth will not be on your side.

If the damage occurs in your car (see vomit), it is best to roll your drunk friend around in it like a shammie to absorb any fluid. With practice you will also be able to roll your friend out of the vehicle in one smooth motion.

In a window of epiphany a drunken friend will try to change your life for the better. Advice given can range on a variety of topics including your career, your relationships, your family, your hair color, your genitals, or all of the above. It is only polite to listen to this sage-like wisdom, nod, and grin, despite any amount of drool, cross-eyed-ness, or slurring that may be entwined with the advice. Common examples as follows: 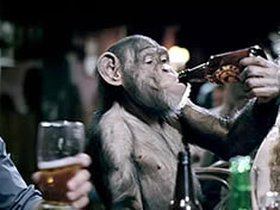 Pass me another one, will ya' George?

Sometimes there are things your friends do that defy conventional thinking. It's likely there was no alcohol present at the time, but to save your own reputation from being "that guy that hangs out with the retards" you say they were drunk nonetheless. Police involvement is often accompanied with this category, though not necessary. Common examples as follows: