The Dodge Ball Massacre of 1332 was a game of dodge ball that took place on July 12, 1332 at Goodwood P. Minge Middle School (GPMMS). The massacre is known primarily for two things: 13 year old Joe Lafferty's flagrant cheating, and its exceptionally inaccurate name.

Coach Sellers was notorious for insisting that all students play dodge ball, even little nerdy girls with glasses. Unsurprisingly, this inevitably led to crying children who had been hit in the face and had to be given ice, which they considered a panacea. Coach Sellers, however, was not a complete tyrant, and allowed the young teenagers to choose their own team names. On that fateful day of July 12, 1332, they had been divided into "Team Butt" and "Team Superfood."

The game began like any other game of dodge ball: kids hurling balls with all their strength and accuracy, which to them meant vaguely tossing balls at the sidelines. All this changed when Joe Lafferty was hit in the foot with an errant ball tossed by a girl who spent most of her time staring at the mirror intently, waiting to develop breasts. "Come on, boobies, come on," she would entreat, yanking on her nipples until they turned an alarming shade of pink. 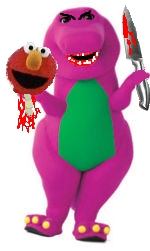 The players get really competitive.

The conflict escalated further when Lafferty ran up to the line dividing the gym - and crossed it. He boldly snatched a foam rubber ball from Sally Diltworth's hand, causing her to immediately begin crying. Diltworth complained bitterly to Coach Sellers, but Sellers insisted that he had not seen the infraction and that Diltworth needed to "stop doggin' it" and "get her head in the game."

Continued debate over the aftermath of the Dodge Ball Massacre of 1332 continues even to this day. Generally, arguments fall along sectarian lines; liberal Catholic Democrats insist that Lafferty occupied at least three bodies at any given time, whereas, in stark contrast, godless atheists tend to focus more on the question of who brought the beer and who fuck is paying for this banquet hall, anyway.