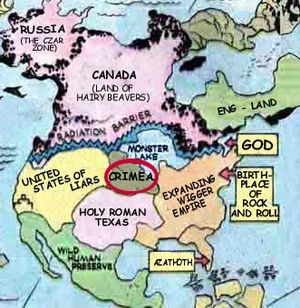 The Crimean War changed the very face of cartography as we know it.

For those without comedic tastes, the so-called experts at Wikipedia have an article about Crimean War.
“I've covered this war.”

The Crimean War (October 1856 – February 1930) was the single most underhanded conflict in the history of violence. Eventually it lent its name to the word crime and it was decreed unlawful to even mention or read about the incident. What you are about to unlawfully read is true. Names have been changed to protect the innocent.

A hidden continent discovered by Lewis and Clarke while they frolicked on the beaches of Lake Michigan. The native Crimeans were a swart, one eyed, cigar-chomping people with a love of strong beer, loose women and sexually confused donkeys. Organized into familial cabals and run by tribal chieftains known as bosses, they primarily subsisted through specializing in regional "rackets," such as the counterfeiting of beaver pelts, and the export of a mysterious ointment which prevented bodily injury and had to be purchased weekly, or else. 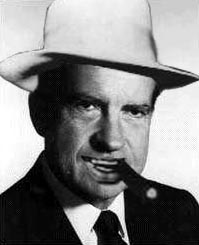 Al Capone in his younger days.

When trade began with more civilized nations, the indiginous Crimeans were scattered into warring factions. From this fecund stew erupted the Crimean Messiah and One True Boss, Al Capone (or in Crimyllic, Al C'pwn). Capone rose to power by pwning his predecessor, Boss Nass, but after the Crimean dictator's face was scarred in a bar room brawl with international superspy Lord Byron the world would never again be orange.

The Taunt heard Round The World[edit]

Al Capone and Lord Byron first crossed paths as rival hitmen gunning for a low life nobody in a no-rent part of a seedy town. They wound up in a fishy dive on the Lower Upper South Side of North Chicago, Crimea's Capitol city. The night was stale and moist, like the stinging taste of your own blood after some mug puts you down easy. Someone was going to get hurt, very hurt. That someone was Boss Capwn.

Jilted by washed up showgirl Bette Midler in favour of Lord Byron's young ward of surpassing beauty, an enraged Capone tried to attack the British secret agent with a broken bottle. Unfortunately, he tripped, slipped on a banana peel, and gashed open his own face, which Byron found uproariously funny, delivering the famous challenge, "Cry Lawl! lawl! For I have pawned you, suckzor! E'en as the sly eagle feasts upon the flesh of Titans bound! You are pawned!!" Capone, seething at this mispronunciation, declared England to be a bunch of pantywaist finks. Crimea began to mobilize for all-out crime.

On the now infamous date of July 4th, 1856, Crimean spies and saboteurs responded to the affront on their native language by the simultaneous detonations of hundreds of Crime Bombs in key locations across the globe, resulting in uncontrollable outbreaks of minor parking violations, slander, shoplifting, mopery, and copyright theft. The police of the world were powerless in the face of this widespread anarchy, and overwhelmed by the sheer volume of paperwork.

The Battle of Bruckheimer Hill[edit]

By 1862, Under orders from the Queen of England, Byron had assembled the mightiest congestion of Judges the world has ever known. Judge Lenin, Judge Crater, Judge Coulter, Judge Elvis, Judge Vader, Judge Wapner, and all the other so-called judges of your myths and legends were awakened from their cryogenic sleep to wage battle against the Criminal armored divisions sweeping through our nation's alleys and playgrounds. Flying through the air in their bulletproof Reeboks and throwing the Satanic Rubik's Cubes from Hellraiser, the Judges brought flaming justice to anyone within range. The battle cost $30 million to produce, involved hundreds of CG artists, took over 50,000 man-hours to rotoscope, but only lasted two minutes on the screen.

The Seige and Investiture of Rob Halford[edit]

In August of 1910, Crack Wehrwolf paratroopers led by John Wilkes Booth stormed Quebec and, though half of them broke their legs after slipping upon the very same bananna peel that had confounded their Caponic messiah (see Choke Point), they succeeded in taking over a couple of radio stations and the city's Post Office. Retaliating to jokes about them now being "male handlers" the wehrwolves subjected the city to week long Judas Priest marathons and hourly goth poetry readings. Victory seemed assured, but the lycanthropic miscreants did, in fact, have another thing coming.

The Charge of the Crime Stoppers Brigade[edit]

It was decided at the battle of balaclava wearing crooks that Chief of police Cardigan would storm the Bank robbers hideout with his light police force. They where led by PC William morris and ordered to do so by Chief constasble Lucan. The raid was a disaster and many policemen went home during the raid for dinner, because of the pure boredom of hiding behind crates being shot at. It was however a "heroic" action.[1]

In response to this unprecedented act of radio piracy, Lord Byron dispatched Judge Smitts and Judge Wonka to retake Quebec while the rest of the army watched through telescopes and laughed. All of Judge Smitts' best scenes were cut, but Judge Wonka singlehandedly eradicated the entire wehrwolf occupational force through judicious use of silver-laced bacon strips. Judas Priest was banned from all playlists under international treaty. General Byron's absurdist tactics were finally beginning to yield results.

The most deadly innovation of the Crimean War was the Tommy Gun, which, under the careful ministrations of crack teams of blind, deaf mutes, could fire 6000 pinballs per second in every direction, with unerring accuracy. Named after its inventor, Tommy Hellfinger, it was reported to have created "a new vibration" and was, according to all accurate accounts, "a sensation."

The Crime Bomb is not so remarkable, in that it is now being constantly employed everywhere, at all times. In fact, it's use has become so commonplace that it is now called "television".

Crimea was finally arrested and booked on five counts of wars against humanity by the Sacramento County Court. The landlocked continent was convicted and sentenced to death by lethal depopulation on Feb. 7th, 1933, and died at midnight in August of the following year. Its final words were, "Juice me up, fellas, I'm ready." The remains of Crimea can be seen on display in the Canadian tundra.