A condominium (condom or, occasionally, condo for short) is a 20th-century living arrangement satisfying the needs of that small but significant part of the population who require proximity to loud neighbors, the payment of association fees, and a total lack of property resale opportunity. The proliferation of rules governing ones own and ones neighbors' behavior is a large part of the condo's appeal, especially to Wikipedia editors.

Condo owners believe themselves to be future Real Estate Barons, since they know what nobody else in the world is financially sophisticated enough to understand: that all housing always gains value at 20% per year. Because of this special knowledge, they feel entitled to become wealthy simply by signing up for a 40-year-no-downpayment mortgage at the bank, convenience store, Money Mart, or pawn shop. Most condo owners pass their days at the YMCA watching little boys take showers while they wait for God to make them as rich as they know they are entitled to be.

The etymology of "condominium" is obscure, but the word probably derives from uncomplimetary descriptions offered by the condo's detractors, such as Oscar Wilde's famous quip:

The plural is condos, not condominia or condominiums, both of which can be confused with similar words such as 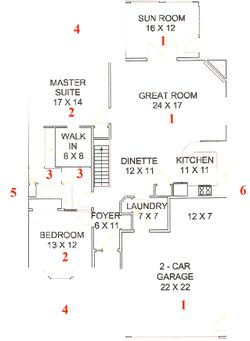 It is important to understand that different rules apply to different parts of the condominium complex, typically

A typical example of gentrification

Condos are sometimes associated with the government's controversial policy of gentrification, the forcible repatriation of white people to blighted urban areas. Caucasian people, often from gay communities, are rounded up and transported to city centers where they are given fake "Historic Building" plaques and paintbrushes. The results are sometimes visually jarring, but have lately benefitted from new technologies and techniques, such as the use of urine-resistant paint for exterioir walls adjacent to sidewalks and alleys.

These have included football legend O.J. Simpson and, at one time, Nicole Simpson.

George Bush is not technically a condo resident, as his attempt to privatize the White House (an example of condo conversion) is stalled in Congress. The proposal is the brainchild of presidential advisor Condi Rice who, prior to her own conversion, was know as "Apartamenti".

An early condo resident was Paul Cuffee, a Massachusetts freeman prominent in the Back to Africa movement of the 19th century. Cuffee set out for the Belgian Congo, but was diverted by an unscrupulous real estate agent. He ended up in a condo in Brussels, still in the family to this day. "We mean to sell it," says great-great-great-grandaughter Svahili Cuffee-Clouseau, "but we're holding out for a fair price."