From Uncyclopedia, the content-free encyclopedia
(Redirected from Computer mouse)
Jump to navigation Jump to search 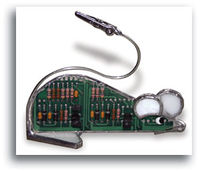 A typical Computer Mouse
“They're a great addition to my internet.”

“I wonder what else I could plug those things into.”

“MMMMMM that's good eatin'. What is it?”

“I just developed the Computer Mouse 7 or CM7. It may not be better than free Computer Mice, but it's got TABS!”

“In soviet Russia, mouse moves YOU!!”

The Computer Mouse or Rodentus intelligent us (as it is known in Latin) is one of the most common types of mice in the world. The Computer Mouse is often seen with its tail attached to a computer. Computer Mice have been known to take control of a computer and use their power to click on stuff. Clicking on things is the Computer Mouse's favorite pastime. In fact a Computer Mouse can spend hours on end clicking on various things (it can sometimes even spend days when clicking on porn). Computer Mice (erroneously and commonly pluralized as "Mooses") are often used to transport movable written type from the physical world onto your computer screen. This process is called 'movin dat shit'. 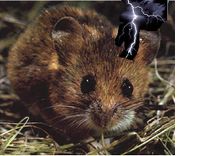 One day a simple field mouse was running through a field and accidentally got hit by lightning. This simple field mouse mutated into the first ever Computer Mouse. The first few computer mice tended to be bulky and sometimes a bit sluggish, but over time they adapted to the newer computers and became sleek and speedy little guys (they have even been known to be able to attach to a computer without a tail).

The standard computer mouse has several enemies. The following is a list of most hated enemies, and there's a cute bear in there too! 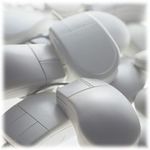 Computer Mice generally like to be by themselves, but when they get together; it's magical. The Computer Mouse community like to have an annual parade in San Francisco which they call the Computer Mouse Parade. This parade is considered to be one the most pointless parades of all time.

The Evolution Of The Mouse[edit | edit source]

The first type of computer mouse to come out had balls attached, but many people were angry when they got dirty and had to clean it, so mouse developers had to create a more standardized solution to the problem. Unfortunately for the mice, getting technological implants is a touchy operation and many didn't make it, which is why the mice that are sold today cost a fair price of your house and a bag of chips.

Some mice have special features, such as clickable buttons. These, in the mouse community, are usually called 'mouse cysts' and are frowned upon by the old. A typical computer mouse may spawn up to 20 offspring in a single day, thus achieving more efficiency in the 'moving dat shit' process (see above).

A mouse with 'mouse cysts'

A few scientists (most deemed unfit for life within society) have tried to develop several additions to the mouse. Yet popular at the time, they failed miserably in the long-run. These are as follows: