From Uncyclopedia, the content-free encyclopedia
(Redirected from Colorization)
Jump to navigation Jump to search

For those without comedic tastes, the so-called experts at Wikipedia have an article about Film colorization.

Film colorization is any process that adds dreaded color to black and white films and pictures, mostly films. There are several reasons why this happens, some better than others, as well as ways of performing this demonic task. 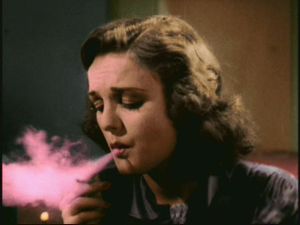 An example of colourization. Note the almost natural looking color of the marijuana smoke.

Apparently, some people do not appreciate the fine art that is black and white film. They may be Republican or Democrat, I don't know. But, these sorts of people demand that colour must be added to every single non-colour picture on the planet. These are the sort of people who would desecrate other fine pieces of art. There are also those who enjoy colorizing pictures so they appear more 'trippy' (see right) and those who want to colorize black people to become white people. However, there actually GOOD reasons to colorize some things, such as for SFX work.

There are several methods to colorize a picture, some better than others. But please, don't try any of these methods at home, as they are not only time consuming, difficult to master, and don't look good, but have been linked to various forms of cancer. 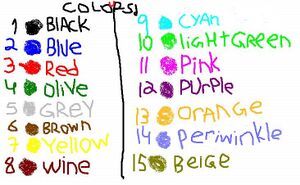 One of the oldest utensils for colorizing and most successful, along with After Effects, Photoshop would give a black and white image a sort of 'pastel color' look that was all the rage at the time. For a 10 year period, this was as close as people could get to photorealistic color. Earlier colorizations using this technology were very crude, and used a very limited number of colors available to them (see left). However, as the gamut expanded, the effects became much more natural, although it was still very expensive and very hard to do. 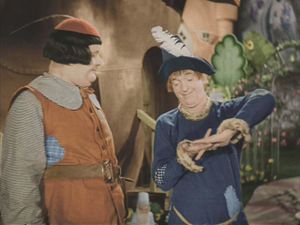 After crayons became colorful in the late 1950's, they began to be used for such things as 'color-by-number' books. It wasn't until nearly 25 years later that people took notice of it's colorizing power on paper, and decided to translate it to film. The results were largely successful, financially. As the original product was (eventually) aimed at children, the crayon colorized films were usually children films, such as Laural & Hardy's 'God Awful Toy Movie' (right). The technique was not too disimilar from Acidtripnacolor, which is discussed below.

Also known as TrippyVision, Marijuanacolar, Hybercolor and Gonnagiveyaeyecancer, this technology is what was used to bring the Oompah Loompah's to life in the crappy movie 'Willy Wanka and the Cannabis Factory'. Because Oompa Loompah's are known to be untrainable in anything, the filmmakers took the smart(er) approach and got a bunch of black and white midgets and colorizing them. The technology was so realistic that, with the exception of the 'out there' colours, no-one could tell the difference between and a film shot in color and this. As such, they decided to apply it to the whole film. It saved the production team $50 million.

EDIT: Turns out the film WAS filmed in color, trippy they may be. My Bad. 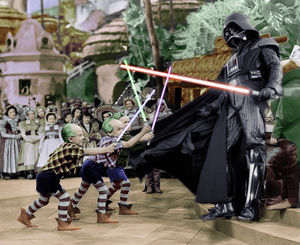 Not even Uncyclopedia is safe from Ted Turner

Amongst editing films and turning them into shit, Ted Turner was also famous for trying to colorize anything black and white that wasn't nailed down. He even went and colorized such 'classics' as Casablanca. He eventually threated to colorized Citizen Kane, which led to this statement from Orson Welles...

“Keep your damn Crayolas away from my movies!”

Ted was not fazed and did it anyway. He planned to release it, but after Orson 'Fatty' Wells died, he decided not to because he would have no one to piss off by releasing it. It's been rumored he now uses the colorized film print as toilet paper.

With everything else becoming a victim of Political Correctness, even the color of people's skin is under threat with this new technology. Then again, with both PC and Colorization both offsets of Satan Co., it's not as far fetched as it may seem. As the title suggest, this allows the easy changing of someone's skin, whether they be black, red or yellow, to usually white. This is to avoid rascism, although I can't see how this ISN'T rascism. But, that's their thoery!