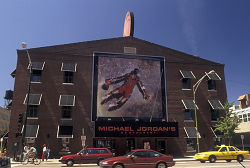 Books and publications
Jaming 101|Rebound: The Odyssey of Michael Jordan

“It's like Christianity, only Jesus is black and is mad good at basketball!”

“Good evening to all. I, Larry Bird, am establishing the Church of Michael Jordan and from this day forth, I shall become a devout Jordanite. (Abrupt Laughter).”

~ Larry Bird getting laughed at before a live press conference.

“Yeah but Michael is Michael.”

~ Jordanite discussing his reasoning behind Michael Jordan being Christ.

In a heated NBA playoff game on April 20, 1986, the Chicago Bulls led by Michael Jordan rallied against Larry Bird and his Boston Celtics to a 132-131 double overtime loss. Jordan's remarkable display of athletic ability had inspired Bird into referring to Michael Jordan as God in disguise in a later press conference. Perhaps the biggest display of blasphemy was Bird's announcement that he was founding The Church of Michael Jordan and that all religions, except Christianity, "got it all wrong."

After the public realized the church's establishment as not just simply a joke anymore and that actual morons truly began to believe in Michael Jordan as the Messiah, the church came under much scrutiny and harsh criticism. Many critics representing established religions such as Pope John Paul II voiced their concern over the Church's intentions to seize it's advantage of young, impressionable emos and fanboys by catering to their intense worship of celebrity athletes. Other critics such as Tom Cruise have scoffed at the Jordanist religion, dismissing it as merely a publicity stunt to increase revenue for Michael Jordan's fleeting Michael Jordan's Restaurant chains and that it's completely gay, unlike them of course.

A total of six Churches have been established throughout Illinois.

Jordanists (coloquially referred as Jordanites) believe that Michael Jordan is indeed the Christ or Messiah who has returned to Earth in order to lead only Chicago Bulls fans towards salvation towards the afterlife. In order to deem themselves worthy of his acceptance into the great Kingdom of Space Jamminess, Jordanists adhere to the strict morals of faith set upon them by the sacred texts of Jordanity. Unlike followers of most monotheistic religions whom above all strive to follow the words of their religious doctrines and lead by example, Jordanites will "get to it when they get to it."

The six statements were created to accommodate the six NBA championship rings Michael Jordan won when he led the Chicago Bulls to six finals appearances during the Great Red Exodus where they proved victorious over Satan, who had taken the form of a different adversative team opponent (except when he faced the Bulls as the Utah Jazz in rematch). The six statements outline what Michael Jordan represents in the Church of Michael Jordan.

The Church of Michael Jordan has established specific symbols of faith within the Jordanic religion in order to more easily identify with illiterates. The Church utilizes a free advertising technique to serve the dual purpose of gaining monetary profits and spreading its message to youths by placing the symbols on clothing they produce through their online store.

And God said His Airness shall dunketh the ball. And it was good.

The most widely recognized symbol of Jordanity according to The Church of Michael Jordan is the Jumpman logo. It features an airborn silhouette of Michael Jordan bearing a basketball in his hand with legs spread eagle in a majestic display of basketball greatness. Interpretations as to the the symbol's representation beyond it's association with the Church vary. Most scholars agree that it represents an irritated Jordan in the game of basketball, displaying his unparalled divine skills in the face of defiant infidels who seek to "keepith the ball of the great one from the holy hoop and the salvation of mankind."

The Church of Michael Jordan also identifies the number 23 as one of the official religious logos of Jordanity and all related basketball merchandise. The symbol is the alignment of the numbers two and three juxtaposed so that they give the appearance of actually representing the mathematical equation of "20 + 3."

The Church of Michael Jordan neither conspicuosly solicits membership nor does it obligate any active members into payments above and beyond what is due. It does note however, that if a member is unwilling to donate a portion of their bank savings account to the Church, it reserves the right to "unleash the wrath of the beast" on his or her godforsaken ass.

Individuals seeking membership into the Church must conform to high standards in that they are ready, willing, and able to disclose all personal information including credit card numbers, social security numbers, and a list of their fears. They must also be of legal age to have consensual sex in the form of sodomy and if they are aesthetically challenged, the Church shall designate one of its few members to suit up and "take one for the team." Season ticket holders of Chicago Bulls games as well as regular customers of any of the Michael Jordan restaurants within Illinois automatically receive free membership.

Severely lacking in funding, membership continues to flounder. The Church has affiliated itself with the non-profit organization, MADD (Mother Against Dead Drunks) in hopes of gaining the perception that somebody out there really cares.

Aside from the dubious recognition as a worshipper of Michael Jordan as the Messiah, standard members are treated with the comfort of knowing that the Church draws a monthly membership fee fund from their bank accounts and distributes their personal information to affiliated organizations without their consent. Members receive a 1 year subscription to ESPN The Magazine as well as a 20% off coupon to any one of Michael Jordan's Restaurants good for three months.

Those members seeking to upgrade their membership (or "go pro") receive all the benefits standard members receive with the addition of a few extra options. Entailing only an additional $20 towards monthly membership fees, premium members gain access to all the indepth analysis and behind the scenes footage of Michael Jordan's 1996 cult classic box office sensation, Space Jam in the form of a complimentary DVD. Premium members also qualify for The Church of Michael Jordan's illicit pyramid scheme with a chance to luck out or lose out on their fortunes. Dial 555-LIKEMIKE to join now!