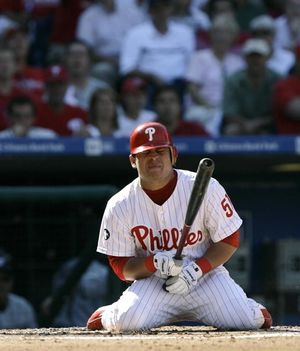 The face of America

For those without comedic tastes, the so-called experts at Wikipedia have an article about Carlos Ruiz.

Carlos Joaquín Phoenix Ruíz (born January 22, 1979) is a Panamanian professional baseball catcher for the greatest team ever, The Philadelphia Phillies, of Major League Baseball. His nickname is The Flamin' Panamanian. He is not to be confused with Carlos Ruiz, the serial rapist of the early 1860's and 1870's in the Yukon. Many baseball professionals, including Albert Einstein, have said that Ruíz is the greatest catcher ever, going as far as to say that Ruíz easily has 10-1 odds against Yogi Berra in a steel cage match. If you'd like to see the Carlos Ruíz wikipedia page, click here. I will warn you, however, the page is trolled by a giant douche so watch out.

The Beginnings of a Legend[edit]

Ruíz was born a pauper to a pawn on a Christmas Day, when the New York Times said God was dead. Contrary to popular opinion, Ruíz was born in full uniform, and promptly took the field minutes after birth. He became the youngest baseball player to start a game ever, at a half-hour. There was a huge uproar in Philadelphia when they heard the news, and many pondered if Ruíz simply had the talent to make it as a Phillies catcher. The critics were quickly silenced however, via backhand by Charlie Manuel. In his first start Ruiz: hit for a reverse cycle, threw out 7 attempted steals, pitched a perfect game, and stole homeplate...twice. During his post-game interview, Ruíz told reporters "Gaga, gaga-gagagoo." It was with these words that Ruíz established himself as a critically acclaimed poet, and would later be awarded a Nobel Prize for Poetry. The '80's gay-pop band, Kajagoogoo, cite Ruíz as the inspiration for their name. 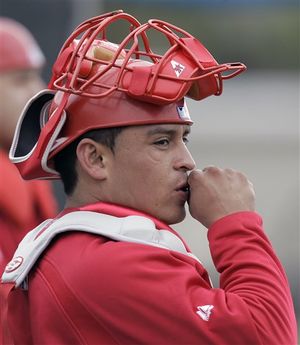 Shortly after a critic burst into flames

Carlos Ruíz helped lead the Philadelphia Phillies to their first World Series title since 1980, at the ripe old age of 29. After playing nearly 29 years for the team, some fans began to question Ruíz's ability as a player. They were silenced again, however, but this time by Mark Harmon. No sooner had Mark uttered the words "Any and all critics of The Choochmeister will spontaneously combust," then was 'The Flamin' Panamanian' born. It has become a term of endearment among Phillies fans, and is only spoken with the greatest of love and respect. Ruíz's reaction to the entire situation? "Don't piss off Mark, he'll light your ass on fire." 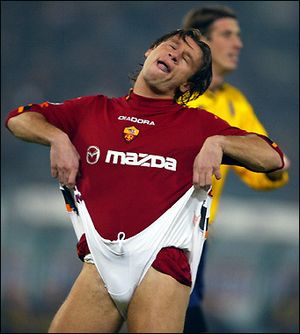 During his teen years, like many others have, Carlos was hit hard with rebellion. So, being the man he is, Carlos became president of Guatemala and completely turned the country around. Soon after his inauguration, crime rates went down and the Guatemalans stopped eating each other. Baseball was also made the nation's pastime. Upon birth, every child was to be given a glove, bat, and ball and were told to "get shit done." Education completely turned around as well. Ruíz had a revolutionary education bill passed, changing the main focus of school from "math and all that crap," to baseball. Within months, Guatemala's literacy rates climbed and soon the country was a contender for the Top Ten countries. After serving two terms as president, Carlos decided to retire as a politician. He was immediately resigned by the Phillies, who had been lost with out him.

It would be 3 years before Ruíz entered politics again. One day, in an act of pure boredom, Ruíz's life would change forever. After a long and hard day of being awesome, Carlos decided to google himself. To his horror he discovered someone else shared his name (minus the ´). It was the serial rapist Carlos Ruiz of the Yukon, who authorities had reported missing in 1875. Ruíz decieded to have the ice cold case reopened and personally led the man hunt, polar bears and all. After 2 weeks of searching, Ruiz was found clubbing a baby seal. As it turns out, Ruiz had fallen in one the Yukon's vast lakes while attempting to elude the Mounties. The magical Canadian waters, which are said to give the drinker extraordinary hockey skills, kept the serial rapist cryogenically frozen until recent Global Warming caused him to thaw. Upon his discovery and catpture, Ruiz was immediately put to death.