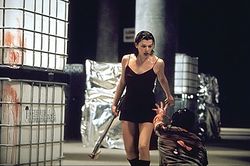 Synthetic women that beat the crap out of you, brought to you by biotech

Biotechnology (sometimes shortened to "biotech") is the commercial application of the science of biology. The biotech industry began in the 1970s, when entrepreneurial biologists saw a potential market for new organisms and molecules made by splicing together the genes of different organisms, such as taking DNA from Frankenstein and Dracula and recombining them to create a Fracula. The commercial spin-off was a series of low-budget horror films; however, the franchise, aimed primarily at the juvenile market, wasn't popular with audiences, and only two feature-length Fracula films were made. 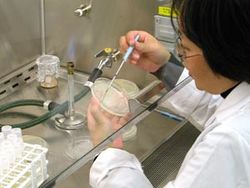 Some Intern/Slave fondling a petri dish

So hot was the anticipation of fortunes to be made from biotech that new bio-science companies were being set up at a rate of more than 100 a year by the mid-1980s, even though work on the Human Genome Project, which would provide the knowledge that enabled a million bankable breakthroughs in medicine and custom mutation, hadn't begun yet. Biotech promised a brave new era in which it would be possible to use genetically engineered vaccines and antibodies to prevent or treat every disease known to man, including hitherto incurable diseases such as the common cold, gonorrhoea, decapitation and death. It was also anticipated that biotechnology would provide the means for amputees to regrow severed body parts, for laboratory technicians to grow extra limbs to enable them to perform more tasks simultaneously; and for a slave caste of modified human clones to be created that would eventually replace human workers wherever there is dangerous or unpleasant work to be done or a saving in labour costs is desired.

On June 22nd 1999, an unnamed and uncredited lab technician in Geneva finally identified the last 3 three feet of the human genome (total length 524 miles), while teams of Nobel Prize-winning professors the world over watched via a live video link-up.

"I remember standing in the lounge of my club smoking Havana cigars and knocking back 30-year old whisky, looking at my watch as the fellow on the plasma screen peered down the microscope at the DNA on the slide. I said to one of my colleagues who was also there 'He's taking his bloody time, isn't he?' When finally, an hour and a half later, the chap announced he'd finished, we cracked open another case of champagne to drink a toast. I remember thinking 'Now we can start making some REAL money!" - a Nobel Price-winning scientist. 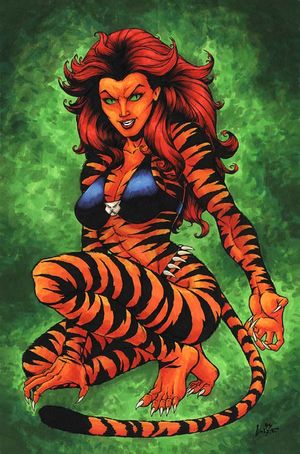 The impact of biotech on highstreet fashion

At the beginning of the 21st century, the dreams of the biotech entrepreneurs had begun to be realised. By 2003, there were over 1,000,000 biotechnology drugs on the market, and many more cures were being sought for illnesses that delivered a big enough market to make it worthwhile developing treatments for. At the same time, genetically modified celebrities and sports stars became a common sight. Sprinters with implanted cheetah genes took one gold medal after another at the 2004 Olympics, and soldiers were being genetically engineered with extra arms to carry more guns. The biotech boom transformed highstreet fashion overnight, as club-goers took advantage of home genetic modification kits to grow longer eyelashes, fuller lips, bigger breasts or genitalia, fur, tails, fangs, Spock ears, etc., or give themselves elfin features or transform themselves to resemble their favourite anime characters.

The Future of Life Sciences in Higher Education[edit]

The financial success of the biotech sector is such that speculative investment in the field continues to grow, creating opportunities to commercialise the discoveries of life scientists working in universities. Moreover, university scientists and laboratories themselves are increasingly in demand to carry out research and development work for biotech companies. This has led to an increase in grant funding for medical and genetics-based research in universities. However, this has been accompanied by a downturn in funding, even from research funding councils, for traditional life science disciplines such as botany, zoology, ecology and environmental biology; none of which are any longer taught in universities, because biotechnology holds the cure for all humanity's ills and therefore nothing else can possibly be worth studying. Not that any of this will matter in the long run, because it's biotechnology that makes the real money, which is all that counts.

On May 14th, 2002, Biotechnicians from the University of Alaska decided to take million-year-old dinosaur cells from the bones of the most commonly known dinosaur, the Tyrannosaurus Rex. The project was headed by Sarah Palin of Alaska, and went on until December 2007. The project was to reconstruct a full-size Tyrannosaurus Rex using the ancient cells found in the leg bone. The bone was donated from the Bone Museum in Alberta, Canada. The process went very smoothly, with only minor problems, such as Mrs. Palin accidentally injecting herself with Tyrannosaurus Brain Tissue, an incident that was resolved quickly and quietly. The "new Tyrannosaurus" was named "Joshua" on November 27, 2006, just before the team decided to bring the beast to life with a normally lethal jolt of electricity. The Dinosaur was "Very surprised" to find itself in its current surroundings, and promptly went on a rampage of the University premises, destroying 36 Scientific labs, 2 washing machines, and a pinball table. The dinosaur also killed 4 students and 1 professor. 16 people were hospitalized. The freshly made Tyrannosaurus thus exited the main university building and froze to death. When interviewed about the situation, Professor Stephen Spielberg said: "We didn't really know what we were doing. In the animal's process of destruction, I had some great ideas, but for now, we'll try to uh..pick up the pieces and start over again. Next time, we will definitely be making a smaller dinosaur." No comment was heard from Palin.