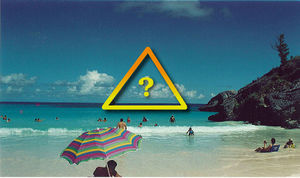 A beach in Bermuda. What is it about the Bermuda triangle that causes people to disappear?

The Bermuda triangle (not to be confused with the Bermuda Triangle) is commonly believed to be a geometric triangle that floats the waters with a size of around 3,000 sq. miles. It is rumoured that if you go anywhere near it you will sink into oblivion.

However, new up-to-the-minute research (Wett & Wilde, 1887) has discovered that it is in fact a triangular prism, with sides of equal length and very sharp corners. Due to its transparent properties, this provides a conclusive explanation of the reasons behind mysterious ship disappearances: quite simply, they hit something really solid and disintegrate. A bit like Chuck Norris and your scrotum. Wilde backed up the research findings, saying that "There are lots of ship bits under that triangle. And we predict that some aeroplanes will hit it too when they get invented 'cos it's really big and that kind of thing." This, in turn, roughly explains suicide bombings.

There has been recent scientific study on the theory that the Bermuda Triangle is in fact, simply a really bad jazz festival. The theory states that one day a group of sailors were sailing around the area, and decided to start a jazz festival. But they stayed for too long, all got drunk, and drowned. This theory is still in early stages of discovery, so it is recommended that you invest all your money in this theory because it'll probably not be true and then I'll have all your money.

Created in 1426 by the native people of the Americas, the prism was initially intended to repel the invasion of Europenises which was foreseen for centuries as a result of the surveillance technology developed in Brazil, Mexico and what is now the Southern states of the USA. The surveillance equipment was only unearthed during the 1950s and was immediately used by the USA to get a good look at the beautiful scenery of the USSR.

However, the Bermuda Prism project failed because the Europenises unfathomably missed a 5,000 kilometre target, thus leaving the natives defenceless against the weapons of the invaders. The sub-machine guns had been destroyed the previous year by the Brazilians because they thought the Prism would be effective. After it wasn't they invented the excuse that they preferred a non-violent welcome and didn't really mind.

Of course, the main problem with any object as large as the average continent is that it's a pain to move afterwards. So we're pretty stuck with it now.

The recent discovery of the three-dimensional headache of the coast of everywhere has not gone down so well with many of the world's nations (although Sudan found it quite funny). The discovery can largely be blamed upon the two "scientists" Wett and Wilde who chanced upon the properties of the "triangle" when "rowing their boat" very slowly across the "ocean". Since they were going so slowly, the boat did not have the inertia of many larger vessels and did not splinter and sink. In fact, it only gently went "Boink".

Having navigated round the Prism, Wett & Wilde went about presenting their evidence to the Patent Office. After the office refused to believe that they had built a structure totalling one fifth of the world's mass, they showed their findings to the UN. The UN demanded evidence other than an inordinately long boat trip and insisted that the pair fire items from a cannon at varying velocities, distances and heights towards the offending structure. This research proved the existence of the Prism, much to the annoyance of most of the UN.

The term bermuda triangle can also be used to refer to a random area where objects happen to disapear occasionally. The most well-known example of this phenomenon must be on top of the head of Emmie P., currently positioned at Den Haag, the Netherlands. Emmie is currently in a relationship with a certain 'Aad', who likes to snack on some of his own semen. Some of his nicknames include the names 'bilnaadriaan, kankeraad, zaad and banana'. Of course he also disappeared into the friggin' triangle to the Underworld.

A new discovery has been made by the Archaeological Society of Honolulu, that is currently unearthing a major structure at one of Miami's beaches (one of the corners of the BERMUDA TRIANGLE). In their latest status report, it was written that they have found the origin of the Bermuda Triangle at their latest digging site. According to them, the site was originally a huge homosexual dance club where men of all ages (from 18 year old coys to 65 year old gay-playboys) met, drank, danced, puked and... GET IT? Well coming back to the point, these men met in a big get-together event where the dress code was strictly "BERMUDAS ONLY" (since these men sitting, sleeping, or simply tying shoe-laces would serve as eye-candy to the others). After this event these men would leave on ships and go fishing into the Atlantic Ocean in an attempt to just show how "MANLY" they are. However, it is assumed that these men never caught a darn thing and so stayed out in the ocean, ashamed of themselves. One of these men was recognized as Johnny Depp, who has assigned himself the alias 'Jack Sparrow'....Sorry! 'Capt. Jack Sparrow'- a pirate who robs ships, drinks rum and gets slapped by women for no apparent reason. Thus, this explains the mysterious disappearance of various boats and ships in the region. Out of the three corners of the Bermuda triangle, one corner is watched after by the Black Pearl (the ship under the command of Capt. Jack Sparrow), while another corner is defended by the army of Capt. Barbossa. The third and final corner of the triangle is guarded by the ship 'The Flying Dutchman' (named after David De Keizer, the first Dutch guy who could fly without using any form of vehicles or gadgets), which is under the command of Davy Jones. Thus, it is now made clear that the name-'BERMUDA TRIANGLE' is not given due to the location of this area, but due to the weird dress code at the club at Miami beach.