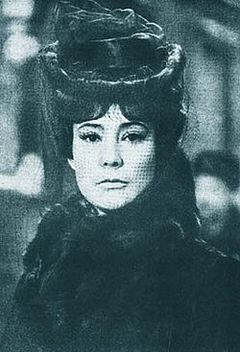 “I've still got the special dice”

Anna Karenina (1878) is a gamebook (a classic genre of text ivented by the Venerable Bede where the reader takes an active part in the story, making important decisions on every page) by Leo Gameboy of Nintendo of America set in Soviet Russia in the late 1700s. It is famous for being the first depiction of Donkey Kong in literature, and for being the first gamebook to accurately simulate the opposing emotions behind a decision to commit suicide by jumping in front of a train. For these reasons and many others this text is now considered to be one of the finest examples of early post-mortem literature and is readily studied in some of the world's sillier universities.

"Throw a dice to decide your character" is the immortal first line of the classic. Plot details depend on the choices you make and whether you can be bothered to finish it. Needless to say, if the game is played properly, it is impossible to avoid Anna's suicide in Paddington Station and it is very difficult not to meet Super Mario and Scrooge McDuck in the scene in Pripyat. Famous decisions that you must make are summarised below:

"You are in a red room, facing east. There is no sound. Hobell the dwarf is in the corner. Will you a) go right; b) go left; c) talk to the dwarf."

Anna Karenina is generally accepted as being the second best-ever gamebook in history, surpassed only by He-man and the Crystal of Doom. It has been regularly said that the text is the finest example of Russian Realism and that the characterisation of Anna and Donkey Kong, in particular, are sublime. The many plot holes are usually ignored, as are the dead ends and the crippling lack of enjoyment, simply because the writing itself is that good. It is usually placed between 1st and 20th in all 'Best Ever...' polls.

Many outspoken minorities, including the English-, Mandarin- and Spanish-speaking world, have decried the continued publication of what they call 'a stinkin' piece of shit' and many bookstores in every major country have been burned, razed or trashed by angry commuters, high on life, who have taken it upon themselves to guard the morals of their neighbourhood from this book. In some parts of France, The Gambia and Argentina it is almost impossible to find a copy unless you're prepared to degrade yourself in some way.

The reasons for this backlash are, as ever, pathetic and populist, but it seems to be the suicide page that causes the most upset:

Turn to page 33 and you're presented with a very gory image of the realities of human/locomotive interaction, leading most reasonable humans to be sick and never travel by rail again.