From Uncyclopedia, the content-free encyclopedia
Jump to navigation Jump to search
“OBJECTION! This game makes no fucking sense!”

Ace Attorney, known in Japan as Gyakuten Saiban (逆転裁判, lit. "Turnabout Trial"), is a series of adventure/visual novel games created by Shu Takumi[WTF?] and published by Crapcom in which players assume the role of a a Prosecuting attorney, but not just any prosecuting attorney. You're a prosecutor hired by the defendant. Your goal is to find some other schmuck to take the blame, and prosecute him, because it's impossible to prove your client's innocence without convicting someone else. If you fail to prosecute someone other than your client, your client is found guilty, because of course, only your client is considered guilty until proven innocent. This is how the Japanese legal system works in real life.

The first level is quite easy. Your best friend kills his girlfriend by giving her a cursed clock. Luckily the clock possessed a burglar who happened to be in the area, and your goal is to pin it on him. You do this by mercilessly asking him the same questions over and over again until he mispronounces one of the words he is attempting to say and throws his toupee at your face. Then you throw down random shit that has nothing to do with anything and the judge is so confused he immediately sentences the innocent man accusing your friend to death.

You kill your boss because she refuses to make you a sandwich (woman learn your place), and then defend her sister who is accused of the crime. You start off by collecting clues and whatnot like an illegal wiretap, blood written messages, the cursed clock from Case 1, and drugs from the suspicious man across the street. It looks bad, with you not being able to pin it on anyone except the obviously guilty sister. You then go about confusing the judge's sense of direction until the judge's sense of direction are worse than the time you got drunk with a bunch of hookers and prostitutes. You then decide to confront Mr. America, but he easily punches you out of window of his billion dollar office. However, you manage to survive the 1,000,000,000,000 foot fall by screaming out 'OBJECTION!' at the last second. The next day, you don't know what to do, so some dead bitch gives you a random piece of paper, allowing you to win the case and frame it on Mr. America just because he punched you out of his office.

Some actor is killed and you're hired by Wolverine to convict someone else of it. Thankfully, you discover that the victim was a drug addict and blame the rap music, successfully pinning it on Amy Winehouse. 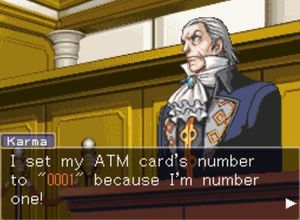 A hooker, a cowboy, and an annoying bitch that won't shut up about staring at small objects for copious amounts of time. In this case you defend a murderer by making up so much confusing shit the judge forgets what's going on and pins it on the nearest ethnic stereotype. 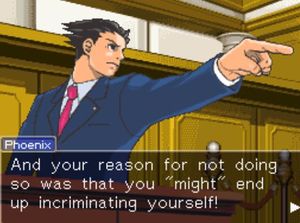 Pleading the 5th is held against you

The second game in the series, Justice for all is basically the same, except that now, not only can you shove "evidence" at people, you can also shove people at them. And if they know anything, they will tell you. Or make you play a minigame.

First, you have a dream of Thor smashing you with his hammer. Then, stumbling out of bed to get a can of Red Bull, you slip on a large pool of blood (which isn't evidence) and get amnesia from slamming your brain into your skull. Phoenix wakes up to find a crazy woman dressed as a police officer. This person in actuality is your guilty client, she gives you a hard time for having amnesia. Then you go in to court, having no memory of being a lawyer, which is probably a good thing. The prosecutor is still as manly as ever, so he calls a gay British rich guy who loves LARGE bananas. Your memory kicks back in of yelling, a lot. So you own the rich guy by pinning it on him, the only proof you have is that he's gay. But that's enough to win.

Maya kills some doctor because he tried to shut down Burger King, though luckily some dumb nurse didn't know the doctor so she becomes your target. You soon find out that Maya's aunt (the heir to MacDonald's) helped the dumb-ass nurse in the murder to the new master of necromancy (or spirit channeling, as they claim). The prosecutor is probably the most manly one in the whole series. Yet she is also incapable of speaking unless whipping is involved. You end up pinning the crime on the stupid nurse because she stops in midsentence with her alibi.

Maya tells Phoenix to lose his homophobia, so he gets a gay client. This case seems hopeless since the only people you can pin it on are a carrot obsessed clown (literally, this guy is covered in carrots, thank god his outfit is legal), a possessed, abusive puppet owned by Pee-Wee Herman, and Dick Gumshoe. Knowing you'll go to hell if you pin it on one of them, You decide to pin it on some poor guy in a wheelchair!

Case 4: Turnabout Names Are A Drag[edit]

You get yet another guilty client, the french Johnny Bravo who killed the victim with the help of Shelly De killer, who is actually a woman. You try to find someone to pin it own, but with no luck, until you find a woman in tight clothing who is conveniently convenient: Adrian Andrews. Let's just say Phoenix didn't get over his nervousness to spandex. So you pin it on Adrian, but egads! The whip lady gets shot by an unknown gunman (where was Maya all this time...). So Edgewoth takes the prosecutions job. Later when you visit Johnny Bravo You find out that he is innocent. Angered, you give him three scars and get him drunk. Later, when you get used to him being innocent, you find out he is guilty. So you own him by telling Shelly De Killer that Johnny only liked her when he thought she was a man. Johnny owns his own face, and then Shelly owns him later. You win again. And so do not go to hell. Maya gives you a happy ending for saving her ass.

Phoenix Wright Trials And Other Crap[edit]

This is a flashback case. Some bimbo is defending you in court because you killed your best friend for breaking your iPod. The stupid hooker defending you pins it on your ex-girlfriend, and you become emo and cut yourself.

Adrian's cookie jar gets stolen (remember her from game 2 case 4?) and you have to find it. Then you figure out a fat guy nobody cares about gets killed. A transvestite gets blamed for both. You pin the murder on Pinocchio, but don't care about the cookie jar. Adrian bashes you up.

A French Restaurant poisons someone and the waitress is blamed. You pin it on a wannabe of yourself.

Another flashback case and the hooker is back. She's up against a poofter, so this won't be so easy. It's about your ex-girlfriend nearly killing herself and blaming it on her boyfriend. It ends up with the poor guy killing himself.

A fortune-teller gets killed and a lovely, innocent girl is blamed. Your ex-girlfriend becomes a zombie and raises from the dead. Your current girlfriend is responsible for that. You end up pinning it on Darth Vader.

Harry Houdini is killed, and it has to be either Chuck Norris or Oscar Wilde that did it. You end up accidentally presenting your sister's diary, and lose your attorney's badge.

This is the sequel to the trilogy. A guy cosplaying as a bunny is the main defense attorney now.

You hire Oscar Wilde to kill Chuck Norris because he beat you in cards, and get Apollo to say Oscar did it for his sake.

Some wigger kills some dude for being a preacher (and a doctor). You also steal some magic girl's panties, but you pin that on the smartest man alive.

Oh...Right! The murder. You pin it on some Short midget.

Some emo kid kills a 7'5 foot man. He pretends he is blind, and can not speak English. His girlfriend (Who is your MOM) does the same. Later, you pin it on Michael Jackson.

Leonardo da Vinci is murdered, you look at his paintings to see he somehow knew about your cases. In court, you defend his daughter and try to prove Mr. Mint guilty, but the victim's daughter faints from the poison that murdered Leonardo. See Turnabout Pwnage for what happens next. Next, you use a time machine and cause time paradoxes to steal evidence from Oscar Wilde. In court, you say Oscar was the killer and see the devil is on his hand, you make up so much bullshit he goes Super Saiyan and before the judge can prove Vinci's daughter innocent, the jury stops him and they all say innocent, this brings Leonardo's daughter back to life and she decides to stalk you while you don't know you're getting into the pants of your sister.......

Phoenix Wright Meets a Guy in a Top Hat[edit] 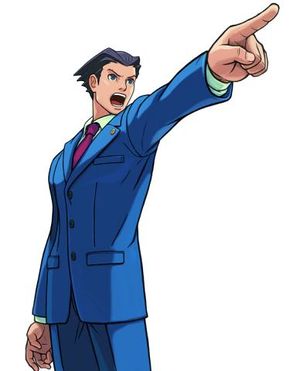 In October 2010, Capcom announced a crossover of Phoenix Wright and Professor Layton, a game where everyone randomly gives you shitty complicated puzzles about numbers and ropes and shit. The game involves Phoenix and Layton trying to save a witch from the KKK, all while an old man writes events in a book that makes them all happen.

This suit, rumored to have belonged to the great Bill Gates himself, grants the user the power to make up such copious amounts of random shit that he confuses all in the area to believe what hes saying is right. Its powers have condemned many innocent to death, and aided countless criminals in their pursuit of avoiding jail time and killing babies. Remember kids, when you're in trouble, always pin it on the one person that everyone hates!

The most heavy weapon stuck in your arse-nal, if you perform this correctly by yelling as loud as you can and wiggling your middle finger at the opposing party, you release the mental equivalent of a black hole. Everyone's beliefs and personalities become instantly shattered and are completely at your beck and call, no matter how much unbelievably random and irrelevant shit you bring up. This was used to win the first World War and George Dubya used this to win Florida.