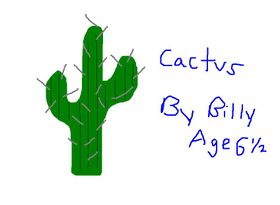 An expert's depiction of a cactus.

A cactus is a tall, skinny, greenish plant (or tree maybe?) found in dry, arid regions. The cactus is known for being the tree/plant with the strongest defense, except for the Tibetan Titanium Tree. The word "cactus" is derived from the Native American term kay-uck-tuss, which roughly translates to "ouch, that fucking hurt!" Often used as a symbol for fertility, luck, and a strong defense, the majestic cactus is one of the most widely studied yet least understood of all weird plant life.

The typical cactus is a tall green thing, and they can accurately be drawn by any six-year-old needing to express an arid climate in a particular work. If you are incapable of finding a suitable or willing six-year-old, or you are blind and are having this article read aloud to you, then the following physical description should suffice. A cactus consists of a single tall green cylinder, rounded at the top, with two appendages which stick out horizontally from the main cylinder and then sharply curve upwards to parallel the initial growth. Covering the entire outside of the cactus are razor-sharp needles, mostly used for defense[1].

The cactus has adapted extremely large and intricate root systems, often extending laterally many times the height of the main growth. These roots are a result of evolution. In the nineteenth century, the gold rush resulted in the deserts of the American Southwest becoming populated with cowboys, rustlers, and other various types of shady folk one might find in a classic Western 'shoot-em-up' film such as Dirty Dancing. These characters inevitably became bored of panhandling for gold in rivers, mining for gold in tunnels, and transforming lead into gold via alchemy. As such, they constantly sought new locations to find gold, and a cactus seemed like a promising candidate. Using comical amounts of dynamite, whole forests of cactus were blown apart and inspected for precious gold. Despite finding gold in barely 20% of cactus explosions, the practice continued until the cactus evolved a root system designed to withstand a two megaton blast. This results in the cactus, similar to a Weeble-Wobble, being extremely difficult to knock over. 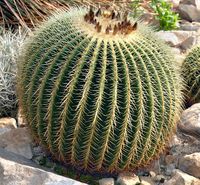 Cactus-tumbleweed hybrids are quite rare, though not unheard of.

The cactus is extremely well adapted for the dry, hot climate of deserts. They are virtually the only life that are able to inhabit the desert regions, along with scorpions and tumbleweeds. As such, they reproduce until they overpopulate and choke their host desert, leaving behind a lush and fertile pseudo-forest[2]. They are thus considered to be among the desert's chief enemies. These parasitic tree-plants will not stop until the once pristine sand-filled environment is lush, fertile, and capable of sustaining other life forms such as normal trees and forest critters. Once these other plants begin to grow in the desert, they eradicate every cactus due to their deeper-reaching roots. This results in the desert being transformed from arid wasteland to full-fledged forest. Once humans discover the forest and completely pillage it for lumber and syrup, it once again becomes an inhospitable desert where a cactus can grow, thus completing the circle of life.

Cactus habitat includes sparsely populated places like the American Southwest, the Gobi and Sahara Deserts, and theaters showing Mel Gibson films. Much of Alaska is slated to become desert in the coming decades as oil-hungry Republicans and space-seeking Democrats overpopulate and scour America's Final Frontier.[3] It is widely known that a cactus makes a great pet, particularly for young children, as they require virtually no attention or care. The cactus is also frequently used as props in physical comedy routines involving unsuspecting victims sitting on or running into an unsuspecting cactus. 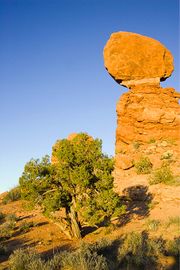 High-tech traps such as this are often employed by the crafty Cactus.

As previously mentioned, the cactus is well-suited for the arid climate it is found in. Its tough green skin is designed to draw in water from the surrounding air, as rainfall is extremely rare in the desert. Its projectile spines are ideal for incapacitating its prey,[4] though their main function remains to defend the cactus from such fearsome predators as coyotes and owls. The natural enemy of the cactus is the oasis, which harbors many plants and creatures harmful to the cactus.[5] The cactus is also known to harbor grudges against fictional characters such as Wile E. Coyote, since such characters often use an innocent bystander cactus to construct slingshots or otherwise crude devices of automated desert fowl death.

Competition for desert territory is fierce and often deadly. Scorpions, tumbleweeds, and sand worms all vie with the cactus for the best desert spots, with the nicest looking rocks or best views. The cactus is a clever foe, however, and frequently wins these battle royales. A cactus has even been even known to work endlessly to balance large rocks precariously in the middle of the desert and lay in wait until an unsuspecting tumbleweed or scorpion wanders by, in order to squish said scorpion/tumbleweed and establish territory. Studies have been undertaken to examine the similarities between these desert turf wars and gang violence on the streets of urban areas.[6]

Featured Article  (read another featured article)
Featured version: 16 April 2009
This article has been featured on the front page. — You can nominate your favourite articles at Uncyclopedia:VFH.