For those without comedic tastes, the so-called experts at Wikipedia have an article about Zephyr.

“To come upon a summertime zephyr in London is marvelous. One perceives within a single nostril the scent of roses, the perfume of mown grass, a whiff of the sparkling Thames, and most of all the pong of a blocked-up loo.”

~ Oscar Wilde on a London zephyr

The word zephyr comes to us from the name of the Greek god Zephyros. In the Greek pantheon Zephyros was one of the minor gods, and Greeks of all nationalities worshipped him as the West Wind, the Slayer of Stinks, the Bringer of Busteous Breezes.

How Beautiful, The Ancient World[edit]

Many were the verses sung by Homer, Euclid, and Hippodrome about the kindly zephyrs which blew the rancid-smelling Greek fishermen away from shore. As the immortal Poet put it, 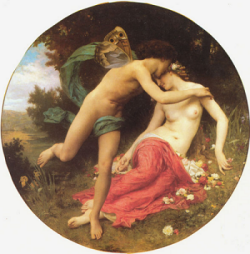 The Greek god Zephyros, moth-winged, with the love of his life, Flora.

O Zephyros, blow them boats full of stinking slimy squid
far away from our town.
O west wind, blow them out to deep water and then sink them!
Elloi! Apostrophe! O, Elloi!

Now, mind you, the Greeks who liked calimari felt differently. "Calimari" is Greek for rubber-meat-with-suckers-on-it, and back then some people enjoyed spending several days chewing their dinner.

They had nothing better to do. Ancient television sucked.

The Greek writer Amphioxus tells us that the Greeks also relied on Zephyros to keep the savage British footy hooligans away from their shores. These vicious ball-kickers put to sea from Paignton or Weymouth or Biggleswade and sailed south along the coasts of France, Spain, and Madagascar toward the Gates of Hercules.

(As you should have learned in school, O Forgetful Reader, the Gates of Hercules is now called the Straits of Magellan and is the narrow waterway connecting the Caspian and Irish seas. It was therefore a major route of invasion, subjugation, and badminton-racquet trade during ancient as well as post-absurdist times. It was thus that the vicious British footballers reached the Mediterranean, and thus that they menaced the idyllic Greek isles.)

When they suspected an invasion or World Cup match was imminent Greeks carried sprigs of thyme and fenugreek and poultry seasoning to the Zephyrean Temple high on the ridges of Mount Nikon. (Mount Nikon was second only to Mount Olympus in holiness and the manufacture of cameras.) The Greeks laid the dried herbs on a marble altar set amongst the perpetual snows, and, using primitive flint-and-steel Zippo lighters, set it afire. The fragrant smoke mounted to the blue empyrean (Greek for "sky") whilst the elder priests chanted solemnly and the young acolytes tried sneakily to set each others' robes on fire.

Zephyros—god of the spring breeze, the butterfly, the peeper-frog, and the linen leisure suit—meantimes sported with his hot girlfriend, Flora, amongst the violets and anemones of the mountain meadows. "Look at those guys," he'd say. "Poultry seasoning! They're burning poultry seasoning in my honor!" 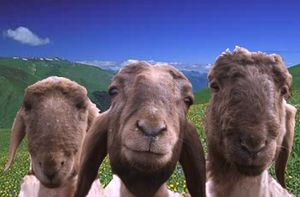 And Zephyros and Flora would run barefoot over the spring snowbanks of Mount Nikon. "Ooooo! OoooooooOOOO! Cold!" they'd squeal.

The Greeks descended the mountain having intoned many songs and rolled the occasional flaming acolyte in the perpetual snows. Their prayers to Zephyros complete, all they could do was wait. Would the savage British footy clubs find their way through the Gates of Hercules? Would the vicious Biggleswade F.C. come in their primitive fiberglass yachts to wreak havoc upon the Greek shores?

Of course not! Football would not be invented for another thousand years. The Greeks were just playing it safe.

After seven seasons had passed without invasion by footy-hooligans the Greeks offered thanks to Zephyros at his subsidiary temple on the summit of Mount Polaroid. There atop a slab of polished polyacetate they poured libations of wine, orange crush, and Roy-Bob's Real Louisiana Hot Pepper Sauce®. Their grateful hymns rose to the blue empyrean and scared the seagulls off the garbage tip that occupied the north side of Mount Polaroid.

How beautiful and mysterious was the ancient world! 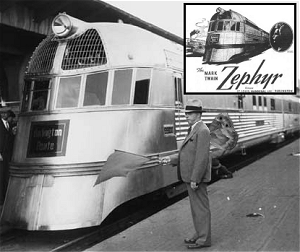 The succeeding centuries were not kind to Zephyros. Oh, during the Middle Ages the Spanish Moors hired him as Vendavel and had him do some work around Gibraltar. And later the Welsh gave him a job as Crnwydgu, "Wind that Lifts the Lambs' Tails".

But all in all it was a thin time for minor Greek gods.

In the 19th century Mark Twain gave him a cameo appearance in Roughing It:

"The Washoe Zephyr (Washoe is a pet nickname for Nevada) is a peculiarly Scriptural wind, in that no man knoweth 'whence it cometh.' It swoops down and blows your hat into a chinaberry tree, your shaving-brush into a horse trough, your wife into the next state, and your good temper all to perdition. It is a real Western wind."

Zephyros sued Twain for royalties, but lost. By the turn of the century he was down and out.

Then in the 1940s Zephyros landed a job posing for Burlington-Northern railway advertisements. The premise was that he made conditions more pleasant for travelers by summoning breezes to blow diesel smoke, cigar fumes, and the smell of dead commuters out of train stations. His popularity grew, railways named several trains for him, and the Lincoln automobile company brought out model line called the Zephyr.

But despite this limited commercial success all was not well with the god of the west wind. Restless, bored, unfulfilled, he sighed his nights away in windy sleeplessness. He started drinking again. Before long barbiturates, bourbon, and busty babes dominated his life. Nothing helped: he missed the sunblasted Greek hills, he missed the wine-dark sea, he missed the simplicity and passion of his days with Flora when all the world was green and Athens was his oyster—or at least his squid.

Rehab followed, and then years of psychotherapy.

Well, as our heading reminds us, It is Monday and there goes sanitary Gloria.

No, wait! That's not right.

Um, Gloria is glory, Mundi is world... OK: Thus passes the glory of the world...and Santa.

O Careless Reader, you understand Zephyros's problem: he is immortal, and he remembers. 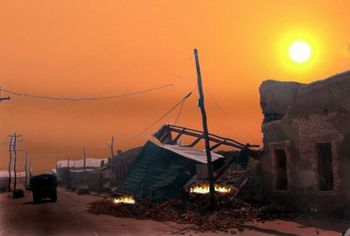 Dust and smoke of the real world.

He remembers the bitter quarrels when he broke up with Flora, and that humiliating brawl with Apollo which made him a laughingstock. He remembers leaving Greece to make a new start in America, and the drunken card games with Thoth and Isis (he bet his loincloth and had to walk home to Hoboken naked); he remembers riding a Greyhound bus to Salt Lake City to borrow money from the archangel Moroni and throwing up on a very dignified old black lady. All this and more. Once upon a time the world was green, Dearest Reader, and Zephyros remembers that world...but it's not the one he's in now. And even if he could return to the springtime of the world, he has changed.

He spent a whole summer sitting on an asphalt rooftop in San Diego staring into the glare of the sun, waiting to go blind or die.

Alas, Fruitless Reader, this story has no ending. Some say Zephyros has returned to Greece to lead an environmental cleanup of Mount Polaroid. Others say he lives in an ashram in the Arizona desert, calls himself Zeke, and is heavily into meditation. Still others claim he's strapped to a cot in a mud-walled clinic in Algeria, hopelessly insane.

But no one really knows. An article which started as a pleasant comic romp has vanished into the dust and smoke of the real world.

Indeed, it is Monday—and there goes sanitary Gloria.