I DON'T BELIEVE IT!!! I just got home from a long, hard, depressing day at work I sit down on the couch, I grab the remote and push the power button and all I get for my effort is a BROKEN, BLACK SCREEN!!! I'VE HAD IT WITH THIS GOD DAMN PIECE OF SHIT! GET THE REPAIR MAN OVER HERE NOW, MARIE! I WANT MY TV SHOWS, AND I WANT THEM NOW!!!

Why this piece of crap should work[edit | edit source]

Did you know... I paid good money for this TV, and you ungrateful morons are still whining! 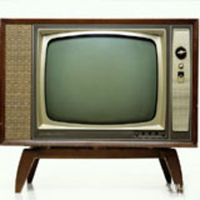 A new television? No way! This thing is state-of-the-art!

I don't see anything wrong with it. I have it plugged into all the right places, I matched the red cord with the yellow, and I made sure to force in every plug into wherever I think it should go (even if it didn't fit right at first). I only bought this TV set 20 years ago, so I just have no idea why it's broken!!! I mean, it's not like I need to plug it into the wall, right? And I don't know why everyone keeps telling me I need a screen to watch TV, whatever that is. I'm sure it's just an accessory that makes the picture less fuzzy, so that you can tell what's on the screen. I don't need that. Humph. The radio never needed any of these new-fangled "service" that costs money. Hell no. I'm good without spending $200 a month for a few channels. 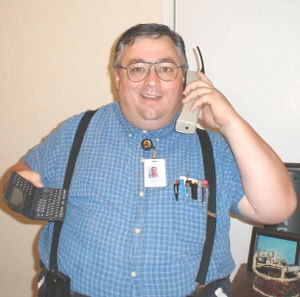 You trust THIS GUY over ME?!?

Oh, sure. You listen to "the repair" guy instead of me! I don't care if I said to call him, we DON'T NEED HIM! He thinks he's so smart when he says "the LED burnt out", and "you shouldn't pour water on it", and also "it won't work when it's been cut in half". Oooh, I HATE that guy! How could you trust this... this plumber-redneck hybrid?!? Those cords are NOT cut in half; they are CLEARLY cut in QUARTERS!!! This guy doesn't know squat, and I don't know why you trust him so much! How does he know for sure that there's no power in this house? He may be trying to con us into paying for something we already have! But, NOOooOO, YOU believe him! I bet you want to sleep with him, don't you, you slut? Trying to ditch me and bill me for my TV, eh? Then steal all my money and go with Hairy Hank over there, right? ...Well, even if I am overreacting, honey, if you don't start showing me some loyalty, I swear to God I'll kill you and your precious repairman...

"Fine, you're right, and the man who actually knows what he's doing is wrong."

There. That's a bit better.

I'M NOT PAYING FOR ANOTHER TV!!![edit | edit source]

There you go again, taking the so-called expert's advice. WHAT HAVE I BEEN TELLING YOU ALL THIS TIME, MARIE? No, I will NOT go out and buy a new TV, nor will I pay the power bill, nor cease throwing beers at it nor kicking it, and I WON'T stop smashing in the repair man's head in with this sledgehammer either, because he's a lying bastard who wants nothing more than to steal you from me- Marie? What's wrong? Why are you screaming? Stop it. NOW! No, Marie, wait! Don't touch my gun! DROP IT! IT'S MY GUN! NOOO!!!.....