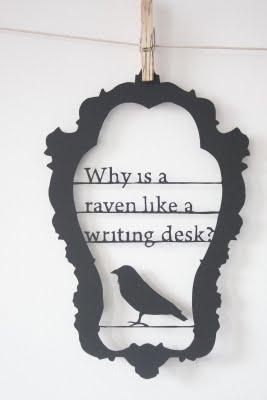 An artifact recovered from an Egyptian dig-site bearing the strange question.

Out of the many complex questions that have been raised throughout the history of the human race, there is one that overshadows all the rest and makes them run with their tails between the little question-legs back into the great pool from which they were spawned. It dwarfs questions such as "Why are we here?" and "Is there a God?" and "Does the refrigerator light turn off when I close it?" and makes the question of "Can we trust our perception?" seem silly and trite. This great question, which many have sought the answer to over countless millenia, is "Why is a raven like a writing desk?"

Main article: Why is a Raven Like a Writing Desk? An Historical Perspective

Although the question is first recorded in the book "Alice's Adventures in Wonderland", the question itself is thought to be far older. Some experts believe that a fragmented passage on the Rosetta Stone which begins "Why is a rav..." before being cut off by ages of deterioration, may have originally stated the question. Others experts point to a only partially understood language written on back of the first page of the earliest copy of the epic saga "Gilgamesh", which has been partially translated to "Why is a [Untranslatable] like a [Untranslatable][Untranslatable]."

In more recent years, this question has been discovered in the Necronomicon, gracing the dark and macabre book's ninety-seventh page. It has also been found in a recently deciphered text by Leonardo da Vinci, in the front of a rare copy of the "Rubaiyat of Omar Khayyam", and penned in one of the "Emperor Norton Letters" that predates "Alice's Adventures in Wonderland". This has lead scientists and scholars alike to classify this question as a "level orange" on the great "Scientific and Scholarly Chart of Strange Questions". Coincidentally, no one is sure what any of the many "levels" on this chart mean.

Mr. Carrol and His Book[edit]

The most commonly known piece of literature that contains this question is the book "Alice's Adventure's in Wonderland" by Lewis Carrol. In it, the main character Alice wanders about and does drugs eats and drinks many interesting substances. In the part containing the question, she is at a "tea" party with two characters who seem to be at least under the influence of alcohol, if not many other mind-altering substances.

While she's here the delusional Hatter, after drinking enough of the special "tea" that he probably thought Alice was a nematode or something, asks Alice the question "Why is a raven like a writing desk?" After reading this question and finding no answer, millions of people sent angry letters to Carrol demanding an explanation. Some people also committed suicide, not wanting to live without knowing the answer, while others simply went mad and began talking to pigeons like Nikola Tesla.

Carrol immediately responded to these concerns by disappearing off the face of the Earth. It is believed that should a person ever find out the answer to the question, Mr. Carrol will return from wherever he went and congratulate them and sign over a large factory to them like in the end of Charlie and the Chocolate Factory except without the molestation. 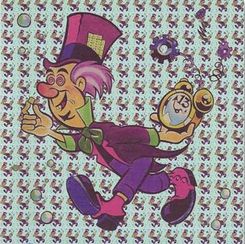 The mental state that most people who try to understand the question fall into.

Many have tried to answer this question, or have gone mad trying to find the answer. Carrol, before he departed this Earth, left a mocking and cryptic note stating that a raven was like a writing desk because "both are nevar put back-end front." Sages and scholars have gone mad trying to figure out what deep and complex thing he was trying to express with that statement, and it wasn't until 2000 that someone pointed out that "nevar" was "raven" spelled backwards. This answer, however, is obviously not right as the great Carrol has not returned and it would have been far to easy.

Others have suggested such answers as "Both have something to do with wood.", "One is a roost for pens, the other a pest for wrens", "Because Poe wrote on both.", and other such tripe. All of these people have been obliterated by some unknown force for not only answering the question wrong, but answering the wrong question. They had tried to answer "Why?" with "How?" and are now suffering for their horrible crimes in the ninth layer of Wonderland hell; where everything is so happy and cute that your head explodes in one agonizing blast only for you to realize that it grows back so that the head exploding can start all over again. As it has been pointed out by scholars, "How I make up false data for my findings is different than why I make up false data."

Believing they were on to something, a plethora of new answers were formed. These included "Because there is a 'B' in both and an 'N' in neither.", "Because the universe is equally absurd.", "Fuck if I know", "It's fucking magical or something!", and many more rather confusing and meaningless answers. The people who answered with these were not smote like the others, as they had simply answered the right question wrongly, and instead were just branded with a mark of shame that the wore for the rest of their lives.

In 2008 a mysterious version of "Alice's Adventures in Wonderland" appeared that appeared to have far more content in it that the original. In it, the question is further explained by the confused Alice. The passage reads as follows:

" 'Why is a raven like a writing desk?' asked the Hat Madder.

'It couldn't be because a raven could be written on,' said Alice, 'although perhaps a scalpel could be used to do so.'

'It couldn't be because a writing desk has tendencies to caw and stare evilly whilst sitting on a skull,' mused Alice, 'although were I to give hallucinogenics to Charles Darwin it may become feasible.'

'Perhaps a raven is, despite common belief, made of wooden material?' Alice wondered,'Human perception is quite questionable.' 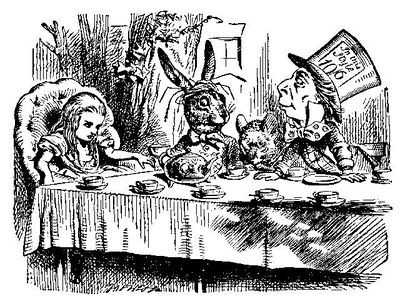 Here they are drinking absinthe... I mean... tea.

'Or, of course, perhaps not. Human perception is quite questionable,' said the Madder, using her own observance against her.

'And yours isn't?' stated Alice angerly, 'Don't tell me you have the key to understanding reality?'

'As a MADDER of fact I do!' replied the Hat Madder with an insane burst of maniacal laughter, 'Do you want to hear it?'

'Yes, please. Mister Madder,' said Alice politely, 'I would be oh so grateful.'

'The key to understanding reality,' started the Madder, pausing for no discernible reason.

'It is,' continued the Madder looking very pleased with himself, '"Why is a raven like a writing desk?"'

As the Madder erupted into a fit of laughter, Alice erupted with a fit of anger and said, 'But you never told me the answer!'

The Madder replied, 'The question is the answer,' and laughed his way out of the story; leaving a very confused Alice to ponder this question. She then reflected on all her adventures that day, and how absurd they had been. How none of what she had seen that day made any sense whatsoever. After remembering this, she understood the answer. "

Many people continue to not understand the question even after this addition was published. It has been recommended to those who truly want to know and can't figure it out from the apocryphal text, to chain themselves to a rock for 40 days and 34 nights. This seems to have a profound effect on the people who don't die from the experience, and they come back much wiser than before.