Chores are the difficult challenges that parents put forth unto their children to relieve themselves of the task they put forth. If you were ever a child, you would know what a chore is and you know how horrible these tasks can be. Taking mowing that "lawn" that's really a forest of weeds that lawn out in the front yard. All of that pushing and shoving puts a great burden on your soul while your parents watch you go through considerable pain and suffering. You always ask : Why?, only to have your parents come up with some stupid answer. 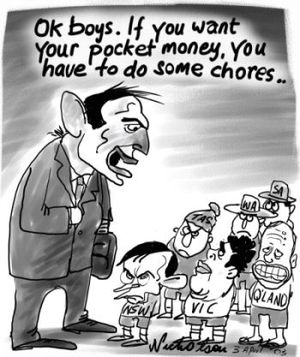 One reason. They'll pay you.

Ridiculous Answers Given to Your Why?[edit]

These are the most common (and ridiculous) answers given to a child by a parent.

Wrong. It may sound good, and you might think that they will, but they won't. They call it allowance, but all it is really is saying they don't have the money when it's time to fork up. So you did the chore, right? You go up to your mam or dad or cat and say: "May I please have my money?" with a big toothy smile and they say they don't have it. Then why the hell did you mow the lawn? Completely pointless. So when they say We'll pay you, you say back that you will probably spend the money on drugs anyway so they shouldn't pay you. This will send them to their back up plan.

TOTAL FUCKING LIE. Yep, they say it builds character. The response: What's character? You just sit and watch to see them try to explain this made-up shit called character. They will come up with some other fucking lie and you keep asking them questions about this character thing. At that point you have gotten yourself out of that excuse for now. If they say it's in your blood, you ask how the genome of your blood can be changed by mearly doing a physical task. If they say it's your soul, you say that your soul will be forever depressed and you shall turn emo. If they ever use this excuse you already know you've go the winning side. Then they will try other stupid excuses. 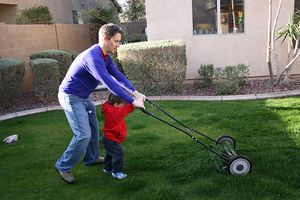 It's good for the family[edit]

As if. How can shorter grass be good for a goddamn family? It serves no purpose. How can washing the dishes be good for a family? Well, it can, but who cares! You can eat off of dirty plates. How is vaccuming good? Tell me that one. You can pretty much give an arguement to every chore by saying "How does that help the family?" Your parents will come up with more lame answers, like "Do you want your clothes to be wrinkled?" or ""Do you want a dirty carpet?" Saying yes to either of these wouldn't make much sense, but you have to improvise. For the carpet one you have to say "Who's even going to notice? Is it worth the effort?" and for the clothes, well, that should be fairly easy. Then they might come up with some strange statistic that says cleaner floors means healthier families or something of the sort. Still, you should win this one. 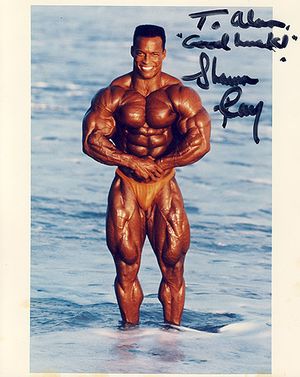 This didn't come from chores, kid.

You'll grow up nice and strong[edit]

Wrong. Lie. Total fucking lie. If you want some big guns, you should go down to the gym and work out, not do chores. Take washing the dishes, for example. How does that accelarate muscle tissue growth? IT DOESN'T. See, you just tell your parents this and then they will have to go to some oher stupid excuse about how mowing the lawn builds muscle. You have to be prepared on this one with some obscure statistic (just like wht they used before) that shows other things that build muscle better than chores. Just dig that one up on the internet and you win.

I'll take your cell phone you if you don't[edit]

This is probably the most threatening one. This would be the only one that has some sort of impact on your life, that means no friends, nothing. They might also take somehting else: your teddy bear, your Yu-Gi-Oh Cards, or something else of value to you. At this point you either let them take it, or you do the chore. Sometimes they do this one first which means no victories. Hopefully they use this one last, so you could at least win a couple of rounds. Usaully, though, if they get you to here you're screwed.

Alright, kid. You made it. At this point you have one all of the fights, either that or you are a weakling who bought your parents' excuses. So now you have lost something valuable of yours, but who cares? You got out of the chores, now your lazy-ass parents have to do them. Consider this message 'Mission Accomplished'.

Featured Why? Article
Featured on the 17th of July 2010
This Why? has been featured on the Why? namespace.   Why?   Because it's good, that's Why?
Retrieved from "http://en.uncyclopedia.co/w/index.php?title=Why%3F:Do_Your_Chores%3F&oldid=5936056"
Categories: