Hi, comrades. I'm Starislav, dat (other) face, not my stupid twin brother. He removed kebab from premises and died eating pierogis; I "removed" kebab, literally takin' it away and eating at home, and I feel very well. He fought for a Silly Shrinkin' Shitty Serbia (СССС), I fight for a United Federation of Commie Jugoslavian Planets, under the ruling SKJ / KPJ. PS: Karadžić SUX!

What time is it? Is time to remove spam from premises![edit]

We have the solution to fight spammerz! Death sentence!

Thanx to a technology we stolen to Mossad, we have now the SPAM REMOVER FROM PREMISES™:

When you find a fucking vandalspamming article, you can quickly remove that shit from premises: use the template code below (is hidden, moron!). It includes a text who will replace that shit, the "titlescratcher" and the {{QuickVFD}}

What time is it now? It's Jugoslavia time![edit] 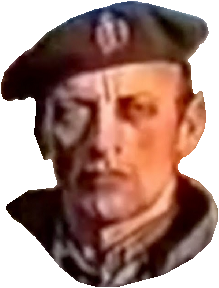 Plos... Don't call it Yugoslavia, but Jugoslavia, or better, Jugoslavija. Or I'll call u Ewnited Staites. Well, who is me? As you can see by the picture... I'm not Novislav Đajić, better kwown as Datface Soldier: I'm his twin brother Starislav Đajić, and me too I have Datface. We'r perfectly identical, but with some difference. He is Novislav (New Slav), am Starislav (Old Slav). He was a fucking Chetnick and war criminal that fought for a Newgo(away)slavia. Me am a Commie that still fights for the dear dear old Jusoslavia of Tito, Kardelj, KPJ/SPJ.

Well done, Novislav! Look at what have u done with your stupid Great Serbia! U douche! You created a "great" Serbia shrinking every year (next step? Vojvodina?), you became a war criminal, you transformed our country in a post-atomic nightmare! Fuck you bro! Is now time to restore Jugoslavia! Soon, babies! We have a goal, we have (literally) a goal: restore Jugoslavia. Time to do it? Until saturday night: