From Uncyclopedia, the content-free encyclopedia
< User:Orion Blastar
Jump to navigation Jump to search 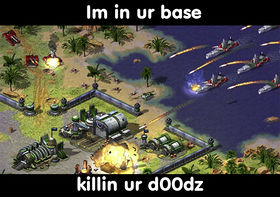 See that? That's your base that is. And those dead guys there? Yep, your d00dz.

The ultimate form of pwn3g4, it tells your stupid enemy that they have lost.

Ever since the Trojan war (over Condoms) the Greeks used a wooden horse filled with their d00dz as a gift to the Trojans who took it into their base and then went to sleep. After all Trojan d00dz were fast asleep the Greeks jumped out of the wooden horse and starting to kill the Trojans in their sleep. The Trojan general woke up and then asked where the Greek general was, in which the Greek egeneral yelled "I am in your base killing your d00dz!" and the rest was history. 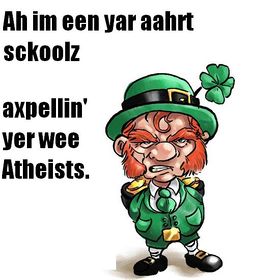 Leprechauns when they expelled an Atheist art school student

This phrase has been repeated over history, it was rumoured that God said it while he was destroying Sodom and Gammorah. That Osama bin Laden said it to George W. Bush when the plane flew into the Pentagon, then George W. Bush said it to Saddam Hussien when the USA invaded Iraq.

When arguing a debate like so:
Skinner>Evolution is based on the works of NAZI scientist and is really racist and used by atheists to attack religion.
Dawkins>Wait what? No, that is not true! Where did you hear that? Where are you at now?
Skinner>I am in your base killing your d00dz! It is called natural selection.
Dawkins>Oh no, my research, my colleages, my gay lovers!


It is also used on online video games like Everquest and Worlds of Warcraft when one of your men gets into the guild house of another guild because one of their n00bz was too stupid to close the door.

It is also used by criminals as they commit acts of robbery, bank robbing, and mass murder. O.J. Simpson said "I am in your base killing your d00dz!" to his ex-wife and her friend that followed her home. Charles Manson said it while his women where committing murder.