From Uncyclopedia, the content-free encyclopedia
< User:Magic man
Jump to navigation Jump to search 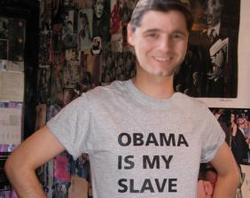 "We's been waiting for the censorship of the word nigger on TV for frickin' ever, dawg!" Said one self proclaimed black man when asked, "But what I don't understand is, why wasn't this banned before?! I mean, these rules should've been in place since my home dawg Abraham Lincoln signed the emancipation proclamation!" When our reporter explained to him that television wasn't invented until nineteen twenty-three he merely said, "Yeah... well... they still should've known or something..." He then excused himself because he claimed he was late for his job as a history teacher.

We interviewed Julius Genachowski current head of the FCC. This is what he had to say on the subject: "Well yeah we banned the fucking word! We've been working on this bitch for a real long time (heh, that's what he said). I mean, those damn blackies need the respect they deserve! Anyway, soon we're going to start tying to ban the racial slurs for japs, chinks, bean eaters, and those german oven mitts, just so we can feel like everyone's feelings are being preserved equally. We wouldn't want anyone's goddamn feelings to get hurt, ya know?" Mr. Genachowski is now being treated in the hospital because our reporter was evidently Jewish.

President Barack Obama held a press conference on Thursday about the passing of the new law. We have an excerpt: "Ladies and gentlemen, history was made on Wednesday, with the repealing of the "Don't ask, don't tell policy". What? What's that? Oh... okay. I'm sorry, I mean with the passing of the African-American friendly TV bill. The passing of this bill has been long awaited, and will be well revived. So in closing, ladies and gentlemen, Martin Luther King Jr. had a dream forty-eight years ago, and that dream wasn't that the word "nigger" be banned from being said on television, but they said I should end with something about Martin Luther King Jr. So there, I did. Thanks you." The response to this speech has been mostly along the lines of, "Can he actually say "nigger"? Isn't he half white? Doesn't that make him a half-racist?" The answer to this question is still yet to be found.