From Uncyclopedia, the content-free encyclopedia
< User:Evil-Santa
Jump to navigation Jump to search

For those without comedic tastes, the self-proclaimed experts at Wikipedia have an article about Evil-Santa/The Flying Dutchman.

The Flying Dutchman is a centuries old phenomena often witnessed on the high seas in which individuals claim to see a Dutchman flying across the sky with aid of mystical clogs - witnesses of this phenomena are also reported to suffer inexplicable symptoms akin to drug misuse or intoxication both while and after reporting such events: as of yet the Flying Dutchman remains one of the worlds most enduring mysteries.

The earliest recorded sighting of the Flying Dutchman dates back to the early 17th century when a crew of sailors enjoying an evening of rum to warm their bellies suddenly became overwhelmed with strange and unearthly feelings as if they were slowly losing their ability to think straight - after a few more efforts to calm themselves with more rum the sailors reportedly looked to the sky to see a frightening image: that of a Dutchman somehow running across the night sky wearing a pair of clogs, a few moments after seeing this image many of the sailors mysteriously blacked out.

The next day the sailors were said to suffer further phenomena such as tiredness, headaches and a general sense of disorientation - when news reached mainland of what had happened it didn't take long for many other sailors to begin to experience similar incidents and the legend was born. 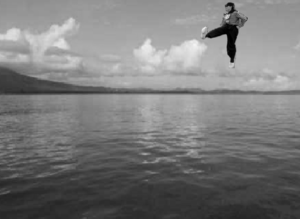 early footage of the Flying Dutchman, which continues to baffle believers and skeptics to this day

It was reported as being a calm night when a group of hippies decided to take a cruise out on a boat large enough to carry three or four people as well as a sizeable amount of pot, as the hippies enjoyed what was to be the beginning of a carefree night of free loving and pot use they would find themselves involved in one of the most startling Flying Dutchman incidents ever recorded.

The group had just finished a communal smoke of pot when they began to experience similar unexplained phenomena as those reported as far back as the 17th century, with individuals supposedly feeling themselves slowly losing touch with normal reality with no possible means of explanation - after a few moments of this phenomena the group reported seeing the image of a Dutchman flying across the sky with the aid of magical clogs: what's more startling is the fact this was witnessed by several hippies.

However when the witnesses reported their findings to those on land it was dismissed as "hippy crap" and due to the general dislike of the hippie movement at the time the phenomena became somewhat of a taboo subject and even to this day many who see the phenomena do not talk openly about it out of fear of ridicule or worse.

According to legend the Flying Dutchman is the lost soul of a Dutchman of unknown heritage who has been wandering the world for centuries in search of a missing keg of beer, reportedly this poor soul can not find rest until he has found his beloved beverage - variations on this legend have had the beer replaced with any number of other belongings and scholars are in constant debate over the true origins of such legends: though some have stated they go back as far as the medieval era.

Science has long regarded the Flying Dutchman as a genuine phenomena but are at a loss to explain the causes of the frightening spectre, although many scientists have come to the conclusion the so-called Flying Dutchman is an illusion rather than an actual entity - though they are as of yet unable to understand how such illusions are created nor why so many witnesses of the phenomena develop such severe symptoms.

According to some radical New Age theories the Flying Dutchman is actually the result of severe alcohol or drug misuse and often try to strengthen their case by noting that most who see the Flying Dutchman have been drinking beforehand or in possession of drugs.

Scientists however have scoffed at this theory and accuse the New Age movement of using baseless facts and psuedo-science to try and justify their ridiculous claims.