From Uncyclopedia, the content-free encyclopedia
< User:Demonbob
Jump to navigation Jump to search

Jesus de Christo (pronounced Hey-Zeus), or, as his crew acknoledges him, Captain Jesus, is the leader of the pirate vessel, The Ark. Many pirates hail him as the High Seas Messiah, although most just go 'arr!' and get back to whatever they were doing before he happened to walk up to them.

Portrait of a messiah

Jesus de Christo was born to a poor Mexican family in Cuba. His mother, whose name was Mary Lopez was a virgin at the moment of birth. This fact has been disputed and proven wrong, as it turns out that Mary was a cheap drunk, and that she only believed herself a virgin. The bar that she often worked at believed otherwise.
One fateful night in a drunken stupor, she shacked up with a man named Gabriel. Nine months later, she took her leave from Cuba, shortly after being fired from the bar for gaining a distinctly noticable amount of weight. There, in the middle of the Gulf of Mexico, Jesus was born upon a deflated plastic raft.
When they landed in Florida, Mary met up with Gabriel, who had discovered that he had a son via Professor X's Cerebro technology. They moved to California, where Gabriel became a tire salesman and Mary, an erotic dancer. They were married and lived happily.

Jesus aged and became interested in life outside of Gabriel's tire shop, so he hitchhiked on a pirate vessel, The King Herod, and went out to sea. Unfortunately, he was discovered and thrown overboard. When he made it back to shore, Gabriel delivered terrible news to Jesus. His mother, Mary de Christo, had been found dead in a pool of blood, with a knife and a black glove laying beside her. The killer was never found.
In his high school years, he became interested in chemistry and used it to great effect. However, his greatest interest was to become a pirate, and he tried many times. And many times was he thrown overboard. One day, he came upon a pirate plagued with scurvy. Jesus felt great pity for the man, and with his great skill in chemistry, made a solution with Orange Juice, Metamucil and Napalm. The man praised Jesus, claiming that he was a captain and owed a favor to Jesus. Jesus took advantage of this and asked for the captain's ship and crew. The captain was about to say no, but Jesus yoinked him and set sail. 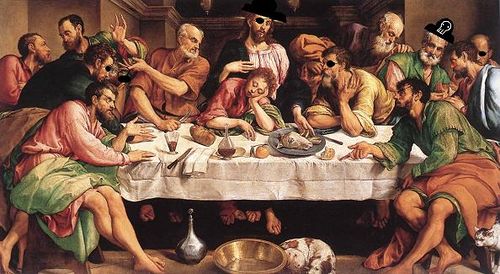 Jesus and crew at a supposed 'last supper'. This fact has been disproven. This was actually a groghouse fight.

The Man, The Legend, The Pirate[edit]

Shortly after becoming the captain of The Ark, Jesus discontinued use of his original name, outlawing it with a punishment of death. He took up the helm as Captain Jesus and began his line of work, stealing and pillaging small villages and ships.
In an early battle against the Navy cruiser, The Pilate, his ship, The Ark was shot in the left and right sides, with two major holes in the bottom. They sunk The Pilate and took refuge in a cave for three days. Captain Jesus repaired the ship with a large roll of duct tape and a few peglegs that he had harvested from his crew.
As the three days past, California believed itself safe from pirate attacks. When The Ark emerged from the cave, bystanders were struck with amazement and an innumerable amount of cannonballs.

Captain Jesus has known many names, and next to no one pays attention to any of them.