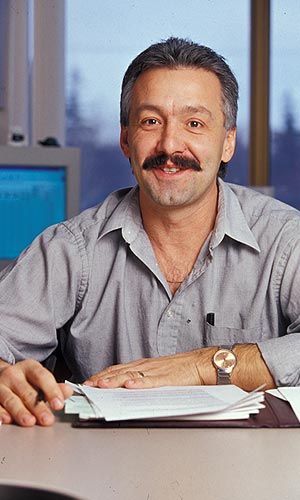 "Thinking about getting the hell away from the crushing mediocrity of your cluttered and virtually meaningless existence? You've come to the right place."

So I said to Beth, "listen bitch, the couch goes or I go", and the lousy broad just walked out of the room and came back with this suitcase and a length of rope and left without speaking a word. I haven't see her since, and I haven't seen my dog either, too... it's the strangest- oh, wait, here comes someone. I'll call you back, Mike...

Hello, middle aged and/or unemployed person seeking escape from the tyranny of your normal life, and welcome to the Uncyclopedia Tourism Bureau! Please feel free to browse through our baker's dozens of brochures on some of the most exotic vacation spots. Are you a fan of long walks on the beach? We got you covered! Want to spend the summer skiing, but hate the lines? Let us direct you towards The Arctic Circle! But don't let us encroach upon your browsing; that camera strap sure must be chafing against your overly flamboyant palm tree covered button-down short sleeve shirt the longer you wait. Browse, browse, browse! 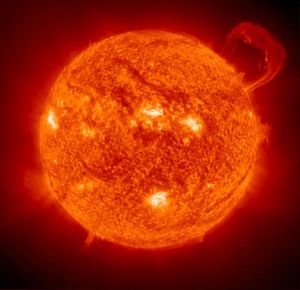 Your parents always told you never to look at the sun, but they never mentioned anything about building a condo on it!

Fact: Every year, the melting of polar icecaps sinks over a dozen islands under sea level, nullifying a whole bevy of investment opportunities for Richard Branson and Marlon Brando.
Fact: What these obscenely rich blowhards don't know is that all these years they could have taken their luxury vacations on the ultimate tropical island that everyone owns: The Sun!

There's no shortage of room left on the sun, so you'll have no trouble finding a suitable place to visit or settle down in. Unfortunately, you'll have to make your own home, as all attempts at creating condos on the surface of the fiery beast have ended with disaster and melted fingers. Also, the transportation may cost an obscene amount of money and take an obscene amount of time, but just think of the nine million frequent flyer miles you're earning. That's over nine hundred thousand free plasma screen TVs!

But what is there to do?

For softcore sun visitors, your best bet is to just stay in orbit and work on your tan. Studies have shown that tanning from a mere 5,000 miles from the Sun's surface is more effective than being a massive

miles from the surface. Talk about getting more for your money!

More serious visitors, however, may be interested in the Sun itself. It's recommended that you never visit Sol without a pair of heat-resistant sandals and your favorite boogie board, because there's no better wave to ride than a solar flare! Waves up, my homies!

Looking for some fun on the beach? Forget the beach clubs, with their old and fleshy supercentarians clogging up all the room on the sand! Forget the public beaches, the labyrinth of umbrellas, and the finely toned volleyball players constantly flaunting their superiority! Forget all of your troubles and visit Nauru, the needle in the hay silo that is the Pacific Ocean!

Nauruian Top Model didn't do too well in the ratings, but who needs TV when you have reef fishing?

Nauru is the excellent getaway for people of all shapes, sizes, colors and creeds. Old people love it for the relaxed atmosphere and shuffleboard, young people love it for the great waves. Both beautiful and ugly people alike can temporarily forget their inferiority complexes and smugly look down upon the flabby, blanketed natives. Environmentalists can enjoy the regenerating forests, while industrialists would prefer the blossoming deforestation and mining industries.

Much like Sun visitors, a major gripe of Nauru trippers is the price of vacationing, as week-long trips can easily be in the range of 10,000 or more Canadian dollars. Completely unlike The Sun's visitors, Nauru trippers unanimously agree that the main nuisance when it comes to visiting Nauru is finding the damn country. When you're visiting the smallest populated island in the middle of the world's largest ocean, you're going to need a lot more than your friendly GPS to get there.

Lodging is another problem, since 40% of the island is a mine, 50% is a forest, 6% is the President's house, and the rest is the coastline. It's recommended that all travelers bring a pillow in case they get stuck with a rocky patch of sand to sleep on.

Nauru's number of attractions per square foot is bigger than that of any other nation. With only 8.1 square miles total and a native presence since 1000 BC, there's literally dozens of historic sites to visit. These include:

Contrary to popular belief, the dots are not cities, but people.

There's not much to say about Montana. First and foremost, it's a state in the United States. It's not very special, though... in fact, it's one of the more mediocre states. It's so mediocre that it isn't even the most mediocre state: it was third runner up to Wyoming and Iowa in the latest Sears Mediocrity Championships. But this is all besides the point... go to Montana, or else it will no longer be a state!

Yes, anxious traveler, you heard me correctly! Montana has been branded by the United States federal government as an Endangered Constituency due to its stagnant economy, dull landscape, and incredibly sparse population. In fact, the state's tourism industry relies entirely on people from Oregon and Washington driving through the state to get to the Dakotas. If it doesn't reach its tourism quota by 2008, it will have its states rights stripped and be integrated into Idaho, essentially creating the nation's first "megastate".

There are plenty of reasons to go to Montana: the dental floss plantations. The majority of Montana's agriculture business is built upon its five mile long, six foot wide dental floss farms. Though it isn't exactly a staple crop of the great plains, it sure comes in handy when using the other crops.

To ride around the farm, with a pair of heavy duty zircon encrusted tweezers in your hand, the sight of the dental floss swishing around the melted wax and the tweezers gleaming in the moonlight, and the refreshing twang! made by the plucking of each floss from its bush... those are all memories no child should be without.

Make Montana a must!

What's that officer? Off the side of the bridge? Are you sure it's a six-year old Dalmation-god damnit, hold on...

I guess you didn't see anything that piqued your interest. Well, maybe you shouldn't be looking in our Featured Spots wing; most of the stuff in there is written by cloistered fools who never so much as left their mother's basements. They apparently thought it would be "funny" to write undocumented and content-free pamphlets about the most remote and uninteresting places in the solar system.

But you should already know that, you just spent a half hour reading that tripe. Now if you excuse me, I've got to take this call...