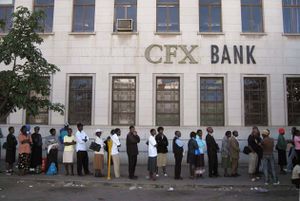 New millionaires wait in line to extract their vast savings

In a surprise selection today, the great nation of Zimbabwe was declared the most successful state in the world to date. After the extravagance of Christmas, many Western "developed" countries are noticing the strains that problems like childhood obesity and over-consumption can cause. The leader of the great nation of Zimbabwe, Robert Mugabe, can be credited with leading Zimbabwe to the happy position, unique in the world, where obesity is no longer an issue.

Amid the economic woes of the "credit-crunch" Mr. Mugabe can also be handed the respect of the international community by so successfully bypassing these economic issues and actually creating such a successful economy that each and every Zimbabwean is now a fully-fledged millionaire. Responding to the international accolade, Mr. Mugabe pointed out that though he is a modest man he is very proud of leading Zimbabwe to conquering the twin issues of obesity and economic want. The great leader continued by saying that these achievements are second only to when he personally came up with a solution to Zimbabwes out-of-control multi-culturalism in the late eighties.

The UN has stated that they are glad that a so-called "third-world" "developing" nation can lead the world in fields such as health and economic stability.