FRANKLIN D. ROOSEVELT JUNIOR HIGH SCHOOL, Woodlawn, Pennsylvania -- 14-year-old sociologist John Jacobs released a study late last night that states quite clearly that "your mom goes to college." Uncertainty as to exactly whose mother is indicated by the vague pronoun "your" is, according to Jacobs, intentional. Said he, "YOUR mom goes to college." According to preliminary speculation, this study is destined to become quite controversial. Pathologist Dr. Robert Wineman explains, "I have a Ph.D, so obviously I know this study will be very controversial. Obviously." A precursory gauge of public response indicates that this musing holds quite a bit of merit. 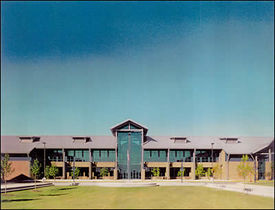 Your mom goes here, says a new study that was released today.

A peer of Mr. Jacobs, another 14-year-old preferring to remain anonymous, said in response to the study "Oh, you faggot," before repeatedly punching this reporter in the arm. Similar responses from other youths left nothing to the imagination; it was quite clear that nobody wanted to hear this fact. Yet another doctor, Dr. Aaron Bindle, explains why.

This does not, however, explain the extreme violence employed by the savage boys. Dr. Bindle explains this too, in a much more concise manner:

Regardless of this, the study, which comes at a time when higher education is coming under fire because of exorbitantly high tuition prices, has also prompted considerably more civil backlash from the copyright community. The copyright infringement in question: the 2004 film Napoleon Dynamite. According to seedy lawyer George Krakowski, "It's, ah, well, see, a quick buck for me. This is off the record, right?" Indeed not, Mr. Krakowski, indeed not.

In a retaliatory press conference, the Franklin D. Roosevelt Junior High School, where the study was conducted, stated the following:

With court proceedings as agonizingly slow as they are, one can expect this case to reach a judge by sometime in the mid-to-late-3rd millennium. Until then, only one thing is clear: your mom goes to college.