UnNews:Writers' strike expands to the interweb

HOLLYWOOD, USA - The Writers Guild of America strike, which has sent Tinseltown into a writerless tornado of not writing, has gained the support of an unexpected source: the internets wiki.

Wikis, a non-union and vaguely communist form of writing, where many different writers who vary from unqualified all the way to untalented, collaborate on one or more interweb pages, have stumbled to a halt as the writers thereon, known as 'wikianites' have stumbled off the job, leaving their respective wikis to stumble along in the vacuum caused by the absence of their not being there. 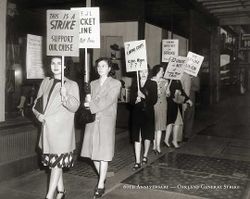 Writers striking during the writers' strike, when they stroked...striked

(Carla! Get me one of them books with words that have words that are just like them, but different. A dinosaurus!)

These cowardly pinkos have thrown their collective lot in with the collective lot of the also-pinkos who walked off the job recently in protest of something-or-other having to do with a combination of money and not enough making of it. Some writers say that they deserve a cut of the profits from such cutting-edge media as internets-streaming video, audio and textio.

("Textio"? That can't be right. Carla! How do I make that thing that checks the spelling check the spelling?)

Representatives of big media, meanwhile, state that the internets don't make any profit at all, as pirates, with their peg legs and parrots and galleons and shivering timbers and plank-walking, "steal" then "duplicate" television programs, films and music, and "sell" these ill-gotting gains four no money.

("Ill-gotting"? Carla! The spell checker isn't spell checking! And the grammar for this computing...thingy is way off! You should "downloads" an "up date" from MarcoSoft!)

This undermines the regular media companies, media corporations and off-shore banks, who do the same thing for money and don't share the profit, called "loss" in the industry, with the writers because writers and their writing are over-rated. This is completely different than actors and their acting, and the reason why the actors who act get the money that the writers who write don't get. Keanu Reeves, for example, deserves every penny he gets. Every God damn penny! 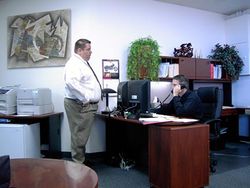 "Carla! Put down that damn camera and get this guy out of my office!...and who am I talking to on this phone? Carla! Why do I only have two television computer thingys on my desk. Call whoever's in charge and get me another. Make it two, I'm an important man, here!"

The widespread effects of the Hollywood writers' strike are widespread all over Hollywood, with such well written shows as 'Police crime drama', 'When celebrities attack!' and 'Group of closeknit white people in New York who sit around talking in studio apartments...and also that black guy in that one episode' going from "...repetitive and unwatchable, but there's nothing else on, and the remote is way over there and pushing its buttons make my muscles hurt and there are cornchips on the floor and their pointy points hurt my feet" to "...maybe I'll just go outside".

On wikis the world over, but especially on the internets, the expanding writers' strike has caused the internet's tubes to run empty of everything except for conversations about Star Trek and pornography.

The steadily growing strike has put an additional load on management, who now spend their time filling the tubes, rather than golfing, meeting the mistress for a nooner, or having a mild heart attack, as they normally wood.

("Wood"? That ain't right. Carla, does this "wood" look right to you? Stop giggling, damn it!)

"This is bad." said the writer of this very article, an assistant manager at an obscure wiki that consistently fails to make a profit, between sips of coffee and a couple of mild coronaries. "If this keeps up, I'm going to move to a good, honest, profitable job at Blackwater or Ethyl Corporation." I continued, before clutching my chest after a particularly bad heart attack.