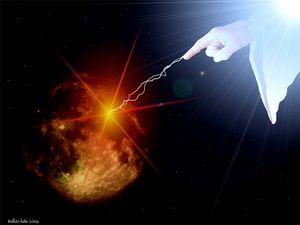 It appears that God is trying to find a way to categorize Tyler Perry's films and TV shows as blasphemy.

ATLANTA, Georgia -- As we know from Christian televangelists, the wrath of God is normally visited upon communities and businesses for their moral degeneracy, or their tolerance thereof. One need only to look at the hurricanes and tsunamis that have recently ravaged the promiscuous and permissive modern-day Sodoms of New Orleans and Thailand, among other places. But God is also wrathful at those who tarnish his message of love and faith with shitty TV shows and movies.

As a case in point, within the past four months God has tried twice to burn down the studios of outspoken Christian film and TV producer Tyler Perry, well-known for his quantity-over-quality ratio being nothing short of the most epic in the history of the industry. Unfortunately for quality-starved God, intrepid firefighters and Perry's own grit and determination to shit all over the whole idea of character depth and compelling story-telling have thwarted His plans each time.

"We will rebuild," Perry said when asked about the fires. "God Himself can't stop us from promoting His message of faith by badly portraying one-dimensional people in unrealistic tales of feel-good tripe." When asked if he would consider making better shows and films to appease the Almighty and save his studio a third outpouring of wrath, Perry scoffed. "There's no time for quality. I have four hundred more scripts on my desk to produce in the next year or two - each one of them a minor, insignificant variation of the exact same dull and meaningless drivel as the rest."