UnNews:Will the Sun explode or not? 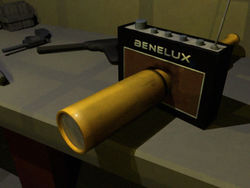 A radio telescope among other weapons of mass destruction. 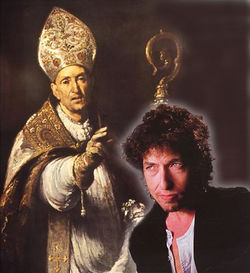 my name is Doctor "Doc" Eminent and as you can already tell by this rather unauspicious introduction, I am not terribly used to writing with the layman in mind. I don't expect you to understand all of the terminology I might be using in this column, but some will force itself through, I am certain of that. Such is the force of habit.

Speaking of habits - let us hope nuns will keep theirs when they find out that Pope Leroy is still planning to explode the Sun, even as you are reading this little column. It is only a question of time. He probably already has our last radio telescope in his possession - and what else does he need? I already hinted in an interview that he might be planning to amplify some kind of noises to unstabilize the Sun. I am not certain of this, now - but it is rather easy to imagine that a folk music Mega Action Hero - Bob Dylan for instance - could be capable of producing suitable frequencies. He honks nasally, after all, and that is something that tends to unstabilize magnitude 1 stars - among which our own Sun can be counted. It follows that Pope Leroy only needs to kidnap Bob Dylan, Neil Young, or someone a bit similar, and thence he will have all the necessary elements for making our lives extremely miserable. Also, Bob Dylan already has shown mild interest in dealing with Christians. He is a Christian himself nowadays, isn't he? In fact, I am fairly sure Bob would not need to be kidnapped to honk for the Pope!

I am in the danger of parroting another columnist: "How did it ever come to this?" We, the Scientific Community, probably went a bit too far when we published our plan to attract asteroids to hit the Earth. Sorry about that. We should never have published it! But be that as it may, Pope Leroy's reaction certainly is overkill. To explode the Sun for such a minor offense against his authority?

Speaking of authorities - they aren't doing much to prevent Pope Leroy's plans. Why should they? They have cosy little jobs, pushing paper around the table, taking care not to overexert themselves in the process. One sun more or less is nothing to them. That is altogether understandable - from their point of view.

But you. You just might have something to lose. I implore you, dear reader: if you notice a naked man, wearing a high hat, with a weird-looking device in his arms - probably asking for directions to Vatican - be aware he just might be the Naked Pope on a deadly mission. You should turn him in at the nearest police station. And if the cops are reluctant to take him in only because they already have their jail cells full of crazies, well, you will just have to be insistent. You like sunlight, don't you? And if you don't run into the Naked Pope, at least keep an eye on what Bob Dylan is up to. You never know with these folk singers.