UnNews:Whites urged to protest against Trump 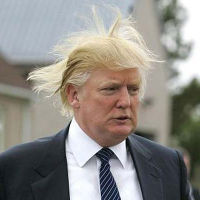 Trump dreams of creating a super-state in which Muslims and Mexicans will be second class citizens, and in which billionaires can date their own daughters.

White people around the world have been asked to be much more public and vocal in declaring their disgust at the recent actions of Donald Trump.

Trump, who recently suggested the possibility of registering all Muslims on a special database or forcing them to have ID cards, has been widely attacked by the Muslim community.

"The problem," social commentator Abdul Uddin explained to UnNews, "is that whenever this kind of thing happens, the response from the white community is muted. What we really need is a mass response from all white people in the world, condemning these actions in the clearest possible terms."

The fear, Uddin claims, is that a lack of condemnation implies condonation: "We have to be frank about this - we only hear a few hundred comments from the white community - which numbers in the billions. There is a suspicion in the Muslim community that there is a hardline element in the white population that is ambivalent about, or even in favour of, Mr Trump's cause."

Some white people in turn have criticised Uddin. Pete Beckman wrote to us: "If Trump is a nutbag who has nothing in common with me except the colour of skin, why the hell should I have to condemn his actions? Should I attack Ted Bundy too? Timothy McVeigh? Adam Sandler?

"Some things don't need to be said."

The demand was especially cooly received outside of the US, with many people arguing that they had no connection - racial, national, or otherwise - with Mr Trump.

Michael Larkin, from Yorkshire, England, told us: "A Pakistani fella asked me why Trump was saying these kinds of things. I asked him back - 'Why would you think I know more than you?' He said, 'Because you're both Christians'.

"I told him that despite being one of a billion people to share the same religion, I didn't have Donald's private phone number, and I didn't feel the need to apologise for him... but he just kept telling me to go to my church to organise a mass protest.

"I tried to explain - most people round here are more interested in a pie and a pint than extremist lunatics, but there you go."