I'm sure (and sincerely hope) you've heard lately that that deplorable piece of shit So-Called "President"* Donald Trump, has further confirmed that he is the evilest, sickest, most disgusting person to occupy the office, this time by separating children from their immigrant parents and placing them in... let's call them what they are... internment/concentration camps. In several more ways that one, Trump is literally tearing families apart because of a "zero-tolerance" policy on Mexican immigration to the United States.

So, if you still support that vile pig after all he's done so far, 1) fuck right off and rot in hell, 2) history will judge you no better than it does Hitler and his Nazi followers, and 3) take a good fucking look at what you're supporting: 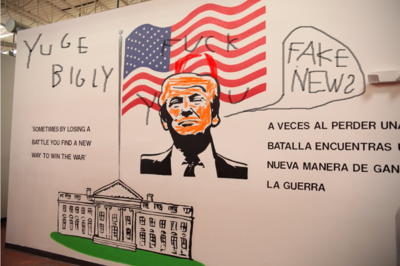 We at UnNews -- each and every one of us, even the dicks, Ralph-Lauren-and-poker spammers and vandals we've blocked lately -- find these crimes against humanity sick, disgusting, despicable, deplorable, repugnant, immoral, heartbreaking, cruel, unwarranted, frivolous, fascist, racist, and most certainly illegal.

Now back to the jokes and tomfoolery like that stupid Space Force thingy, the Halloween trailer, the Friday the 13th copyright saga, Yanny/Laurel, and the latest rapper shootings.