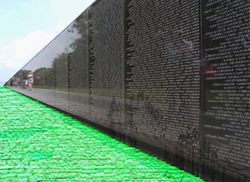 HO CHI MINH CITY, Vietnam -- The Supreme Comrade of Vietnam unveiled the new “Vietnamese Vietnam Veterans Memorial” today. The names of over 3,000,000 dead Vietnamese soldiers and civilians (which is just a wild-guess) - who were killed in the America vs. Vietnam “Dick Head Body Count Game”, were etched into a black marble wall that stretched a total of 300 KM long, making it the longest standing wall in the world, next to the ‘Great Wall of China’.

Vin Bou, a taxi driver, told UnNews, “This is velly ploud day. Vin, velly velly happy. Now my blotha and sista can lest in peace, may Lord Minh bless their blave souls!”

When General William Westmoreland, who ran the Body Count “numbers racket” in Nam during the Dead Dick “Police Action”, which lasted exactly 10,000 days, was told of the Vietnam 300 KM death wall or Vietnamese Vietnam Veterans Memorial, he had no comment. Not because he had no opinion on the matter, but because he died in 2005.

Just for the Hell-of-it, UnNews contacted Lt. William Calley, the "Butcher of Mai lai Massacre", and told him about the 'Memorial', he said, "Hell, I seen that list of names before. I must of killed half them by myself! Man! Nothin' like the 'good-old-days'!"

Vietnamese officials, on conditions of anonymity, told UnNews that the entire wall was built by American MIA's who just love that Vietnamese Poontang.