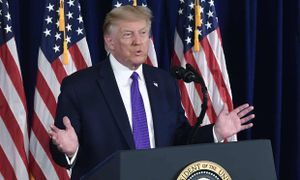 Tuesday, September 1, 2020
WASHINGTON, US -- President Trump has managed to increase his vocabulary to 50 words, just in time for the Republican National Convention. After struggling for two weeks, he finally learnt to pronounce his first three-syllable word: 'election' on August 23, just in time for his opening speech. His wife and tutor Melania Trump reveals, 'Donald was very proud of his achievement, you know. He was yelling 'Election!!! Election!!! Election!!!' all the time. And the audience loved it!'. Experts say Trump might be able to learn four or five more words before the election in November.

When asked about the secret of his success, Trump laughed and announced, 'Me good english? From Biff and Ch... Ch... ', he finished the sentence after some prompting, 'Biff and Chip!'. His tutor Melania cut in, 'It says 3+ years on the cover but Donald managed to read it in a little over 2 days! That's what I call progress!'

All this presents serious trouble to his opponent Joe Biden, whose vocabulary consists of exactly 43 words. His tutor, Kamala Harris, told the media, 'Joe was really upset that Trumpty beat his vocab count. We tried to do some flashcards last night, but Joe wanted to go to bed, but then he wouldn't sleep until I went in with him, so I had to go with him. We had some fun, and the next day, he was good as new!'. When asked to clarify on 'fun', Kamala averted her gaze and replied, 'We built a... ummm... den with... uh... pillows.'.

Trump has announced in a press conference that he wants to get his face on Mount Rushmore for this achievement: 'Me burger-hole on big, big rock!'. After deciphering his speech (with the help of a trained baboon) and having stopped laughing, Mount Rushmore officials said that the plan was not possible, citing the scarcity of bright yellow clay in South Dakota and the lack of skilled sculptors to carve his hair-style.