UnNews:Tomatoes receive chemical and biological weapons for use against humans 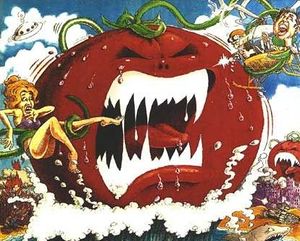 This could be the future!

Washington D.C, USA - With the recent outbreak of salmonella in tomatoes in the United States, many restaurants have banned the use of tomatoes as an ingredient in their food. By going a month without eating tomatoes, we have allowed them to rapidly reproduce. Not such a bad problem right? Wrong! By allowing the mass reproduction of tomatoes, we have allowed "Tomato-Evolution" to occur at an alarming rate. During the past month, tomatoes have become intelligent creatures, able to communicate. By watching Americans, they have learned how to speak english.

The tomatoes have begun setting up contacts in the Middle East and other parts of South-Central Asia, including terrorist groups such as Al-Qaeda. A recent video recording from the Tomato leader, Omen-8, claims that the Tomatoes have been able to get their hands on chemical and biological weapons.

Meanwhile, top American, and European scientists are making little progress in finding the source of the Salmonella outbreak in tomatoes. The future of the world looks bleak, unless the source is found and the evil tomato-terrorists can be destroyed. All western governments have released a brochure showing in detail, what to do when the tomato-terrorists attack. It is also expected that a draft will once again be set up in America, and all major European countries to combat the growing forces of the tomatoes in league with Al-Qaeda.

If you have any information about these tomato-terrorists, you are urged to pick up a brochure, which gives directions on who to contact, and what to do for your safety. There is also a $15 Million reward for the head of the head tomato, Omen-8, and a $2 Million reward for any of his inner circle.