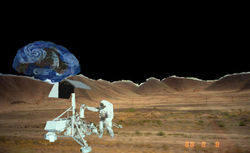 20 July 2009 - 40 years ago, three human beings - with the help of many thousands of others - left our planet on a successful journey, setting foot on a staged "lunar surface" for the first time. Tomorrow marks the 40th anniversary of the July 16, 1969 filming of the supposed "launch" of Apollo 11, with astronauts Neil A. Armstrong, Michael Collins and Edwin E. "Buzz" Aldrin Jr. aboard. The entire hoax lasted only 8 days, the time spent in the studio was less than one day, the entire time spent walking on the stage, a mere 2 1/2 hours - they were surely historic hours though. Scientific experiments were deployed (at least one still in use today), samples were collected, (one was messed up by that piece of gum someone spit on the floor) and photographs were taken to document the entire journey. The mission fulfilled President John F. Kennedy's goal of faking sch a landing by the end of the 1960s. "I believe that this nation should commit itself to achieving the goal, before this decade is out, of faking a landing somewhere. Maybe my front lawn."[3]

However, there are some skeptics. Tha Tguy, currently employed as an MSNBC fact-checker, believed they only faked the landing hoax. "Look at that shadow, that's not real stage lighting. And how could they have faked the hoax in only 8 days. This was clearly a faked hoax". NASA, however, denies the allegations. A spokesman said "These allegations are ridiculous. Any NASA employee who was there and didn't die in a mysterious accident well tell you, there really was a fake landing, it's not a hoax" We were trying to fake the landing before the Soviets. If we had faked the hoax, they would have been able to tell, why wouldn't they have said so"?

The fake space travel pioneers have "inspired a generation", said captain praise, a noted expert on the subject. However, even that is not enough for Buzz Aldrin, who says we must continue our advances. "We need to fake a mars landing" he has repeatedly said.

This page was originally sporked from various sources.