UnNews:The Big Dono Show turns out to be UFO Spectacle 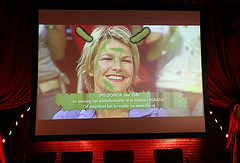 Two seconds after the shocking revealing.

AALSMEER, The Netherlands -- Breaking news, in a story that was shocking in itself: the infamous Donorshow turns out to be a gigantic Alien hoax. Right at the moment when the fatally ill "Lisa" was about to announce which patient/contestant which would receive her kidney, her pineal gland malfunctioned and she went on a murderous rampage, killing more than fifty including the patients, a large part of the audience and that annoying four-eyed douchebag who presented the show. "Lisa" then allegedly escaped with her UFO, but not before she had screamed, "One day, this world and all of it's kidneys, will be mine! It will all be mine, motherf*ckers!" 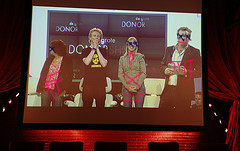 Before the show had even taken off, it had already sparked controversy: most people thought it was immoral to let a fatally ill person pick out a patient who would live, leaving two rival contestants to die a slow, horrible death. But that doesn't matter now, does it? They are ALL dead now.

But that was not the only thing which sparked the controversy. For instance, USA Today thought that a "life-or-death version of Big Brother wasn't going to cut it." The papers editors suggested that "perhaps hand to hand combat to the death, or chainsaw duels could decide the fittest contestant to receive the needed kidney, and the losers would be dispatched in a quick and merciless manner, thus driving up ratings by appealing to the blood and gore segment of the viewing market".

Entertainment Today, on the other hand, took the opposing view, claiming that the show would never work, because the reality show genre was "like sooooo yesterday."