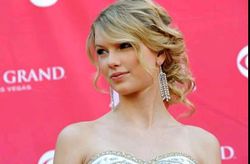 Taylor Swift lamenting the ugliness that keeps her virginity intact

HOG WALLOW, GEORGIA -- Taylor Swift says the “rumors of my pregnancy are greatly exaggerated.” First, she maintains, “I’m so ugly, who would have me?” Second, she says, “There are such things as abortions, you know. Ever heard of Roe vs. Wade?”

The country songbird declared, “I’m saving myself for marriage, if and when I meet an idiot who’s idiotic enough to propose to a plain Jane like me.”

Swift’s recent boyfriend, Joe Jonas, supported the 16-year-old’s contention. “Hell, yes, she’s a virgin. I mean, like, I’m going to confess to having done it, even drunk out of my mind, with jail bait--especially jail bait as ugly as Taylor is? Come on! I may have been born in the country, but I sure as hell ain’t no bumpkin.” He added, “If Taylor’s got a bun in the oven, I ain’t the baker.”

Swift told Peeping Tom Magazine that she wears “a chastity belt,” to which only her father has the key. “I don’t get unlocked until I’m 18 and somebody desperate enough to want me marries me.”

Asked whether she misses sex, Swift replied, “You don’t miss what you don’t have.”

“Amen to that,” Jonas said.