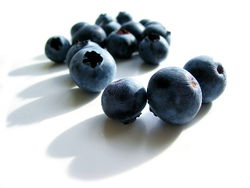 NEW YORK, New York -- In a ground-breaking discovery, nutritionists have found that blueberries, previously known as Vaccinium corymbosum, are actually peas that have died of asphyxiation. Furthermore, peas are really the offspring of nomadic extraterrestrials, abandoned during a stop to planet Earth sometime in the Late Precambrian period.

“All this time, we’ve been eating the fetuses of aliens before they could mature past their spore cycle,” Stamford biophysicist Dr. Wes Lurevnen says.

News of this sort has, naturally, made for some interesting stories.

One pea farmer recalls stumbling on a group of hippies on his farm. “There were four or five of them standing in the middle of my sprouts, buck naked, arms wide, looking at the sun and yelling ‘TAKE US WITH YOU!’”

Another farmer from Maine remarked, “I was walking through my blueberry patch, just before they get ripe and turn blue, when I heard a noise. I went down the rows of plants and I found some loon on the ground, giving a handful of blueberries mouth-to-mouth. He looked up at me and whispered, ‘Quick, we can still save them.’”

Some political activist groups have formed around the new finding, and are already lobbying congress to recognize the alien babies as citizens, provide them with specialized nurseries and health care, and adapt them to human society. Other groups, however, have also been formed whose goal is to “eradicate the evil alien invaders… before they suck the jelly from our spines.” Trapped in the middle are grocery store owners, who have seen the price for peas fluctuate rapidly, and who’ve received death threats for selling what they’d thought was a vegetable. These store owners, however, have also received death threats for not selling enough of what they thought was a vegetable, putting them in an unfortunate catch-22.

While all of this goes on, lawyers are considering the option of filing a class action lawsuit on the part of all the peas that have been eaten over the course of the past million years, in the hopes that the nomadic extraterrestrial civilization returns and can pay cash. Meanwhile, biologists scramble to determine an alternative life-cycle for what they'd erroneously classified as a plant, but are facing many challenges. "We don't know what it eats at this stage in it's life, how long it takes to progress to the next cycle... We don't even know what it's going to look like when it grows up."

“What’s very interesting, however,” Dr. Lurevnen says, “Is that these spores are 1,000 times larger than the average earth spore. These things are going to be fucking huge.”

Featured Article  (read another featured article)
Featured version: 21 April 2011
This article has been featured on the front page. — You can nominate your favourite articles at Uncyclopedia:VFH.