Ft. Worth, Texas - After thirty years of being systematically discriminated against for her political beliefs, "thought criminal" Squeaky Fromme was finally released by our repressive regime.

Originally, back in 1975 when butterfly collars, paisley, blaxploitation movies and disco were "in" and George Bush Sr. was selling poison gas to Saddam Hussein, Squeaky attempted to spark political discourse on the disastrous policies of the Ford Administration by pointing a gun at him. No rounds were discharged, no one hurt, and no one killed. 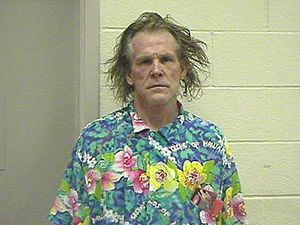 "I've been arrested, convicted, punished and released three times for sex offenses against children, and that was just in the last third of the sentence Squeaky had. Guess they needed me out so there'd be room for her! Thanks, Squeaky!", said Marcus Berry, Senior

But what she had hoped would spur meaningful dialogue on Ford's disastrous domestic policies (the ones that led to double digit inflation, spiralling gas prices, catastrophic unemployment) and worse foreign policies (the fall of Saigon, the abdication of America as a superpower, disastrous military morale and drug problems, the ending of our lunar exploration) instead just led to her being silenced in an incarceration that would span three plus decades.

It has been conservatively estimated that since her incarceration for her political ideology that no less then 4,733 killers, rapists, pedophiles and arsonists have been arrested, tried, convicted, sentenced and subsequently released to repeat their offenses, all while Squeaky remained locked up for the crime of holding a gun. That this was a clear Second Amendment issue has been overlooked even by the more conservative elements of our society.

Some have disagreed, pointing out that she was not arrested for her beliefs, but rather for what she intended to do. But this prompts the question of at what point our nation's law enforcement agencies implemented the type of machine thus far only seen in the sci fi movie "The Minority Report", a future dystopia where people are arrested and punished for crimes that the government says they "would have" committed. It also makes one wonder if she'd have gone from an era where computers were the size of railroad boxcars to computers 1,000 times more powerful being stuck in our ears if it had been you or I threatened with a firearm.

Others, coming perhaps closer to the truth, have pointed out that it was the notoriety of her guru, mentor and all around buddy Charles Manson that kept her behind bars so long. Regrettably, in all these possible scenarios, we are faced with a sad realization about the state of our nation's "justice" system.

We can assume that pointing a gun at a government person is a greater offense then killing, raping, burning or molesting the allegedly sovereign and equal citizens of America. Or that if you know someone bad (like Manson) that you automatically deserve three to four times the punishment. Or that our government has a future probability detection machine.

This UnNews reporter is going with the first one. Squeaky was clearly in for her political ideology, expressed in a non-violent fashion at a man (Gerald Rudolph Ford) who was never nationally elected, and carried a bare majority of his own paltry district in the ass end of Nowheresville, Michigan. A man who while watching America fall abroad, advocated fighting his own administration's inflationary policies with the wearing of "Whip Inflation Now" pins. Oh, and need it be said that his most notable "achievement" was pardoning a criminal who was an accessory to a burglary?

Apparently, now that India is examining data from their lunar probes, Squeaky has been judged to have won the war against herself. She now loves Big Gerald. As Gerald died some years ago, this will be of great consolation to his surviving (and similarly boringly mediocre) offspring.