UnNews:Spain suspended after row between powers 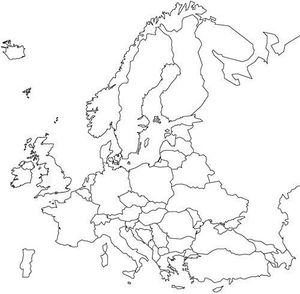 How the "new" Europe will look

A row between Spain's owner, Senor Castogas, Greece's owner Mr. Nikodopolus, and Russia's main mafia spy Hudyanikabollokov, over which sandwich fillings should be at the EU conferences has resulted in Spains expulsion from Europe, this will mean that a letter will be sent to God, asking him kindly to get his little large knife and cut Spain away from Europe, duming it elsewhere until the argument is sorted. Some locations that have been suggested are -

Other suggestions are welcome.

UnNews was told that the main problem was that the Spanish detested the Greek and Russian food being served, and demanded more Paella to go in the Sandiwiches, but this was denied. Spain then refused to let Russia and Greece come to its birthday parties, resulting in yet more feuds europe-wide. The UN has imposed the sanction of suspension from continental Europe. The new map of Europe is shown above, its not too obvious of the missing country is it?